Bishop’s son deported from US to El Salvador, where he fears for his life 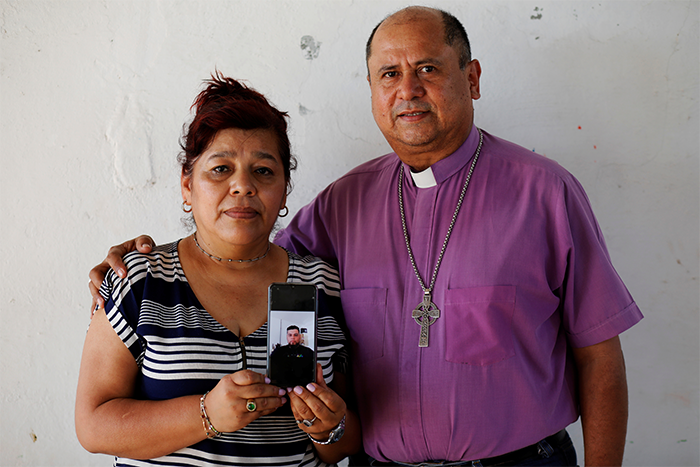 The son of the Anglican bishop of El Salvador, who fled to the United States after being kidnapped and threatened in his home country, has been deported back there from the US, according to his father. Josue Alvarado Guerra, 34, was detained by US Immigration and Customs Enforcement (ICE) after getting a flat tyre in Ohio in November, when police discovered he did not have proper immigration documents. Alvarado Guerra filed a petition for asylum but was denied, and he was sent back to El Salvador on 28 January.

Bishop David Alvarado of the Diocese of El Salvador, which is part of the Anglican Church of Central America, said his son had to flee El Salvador because his life was in danger. He had been working as a taxi driver in Colón, just northwest of San Salvador, one of the most dangerous cities in a country with the world’s highest homicide rate. Alvarado Guerra was “threatened, kidnapped and persecuted by one of the largest gangs operating in the country” and forced to drive them around, according to his father.

In a letter to Ohio Bishop Mark Hollingsworth Jr and others who have offered support, which his office shared with Episcopal News Service, Alvarado expressed a combination of fear, gratitude and happiness at his son’s return to El Salvador. He added that the danger to his son’s life is so great that he is still trying to make arrangements for him to live in another country.

“We thank the God of life for allowing us to have Josue back in our house and share with him the difficult experiences he lived in detention,” Alvarado wrote. “Josue definitely can’t be safe anywhere in El Salvador, we fear for his life. . . We want to continue with the plans to get him out of the country as soon as possible.”

Alvarado said his family is looking into requesting asylum for his son in Canada and has been in contact about that with Charles Robertson, Canon to the Presiding Bishop for Ministry Beyond The US-based Episcopal Church. However, Robertson told ENS that Alvarado Guerra faces an uphill battle in seeking asylum in Canada after being denied in the US.

Alvarado is also examining the possibility of getting a missionary visa for his son to do reconstruction work in the Bahamas. Although it might be easier for Alvarado Guerra to move to another Central American country, “the situation of insecurity is the same as that of our country,” Alvarado said.

“We know that there is a large list of friends who gave spiritual and pastoral support to our son,” Alvarado wrote. “We are fully grateful for all they did and we beg you to continue supporting us to put [Josue] in a safe place.”