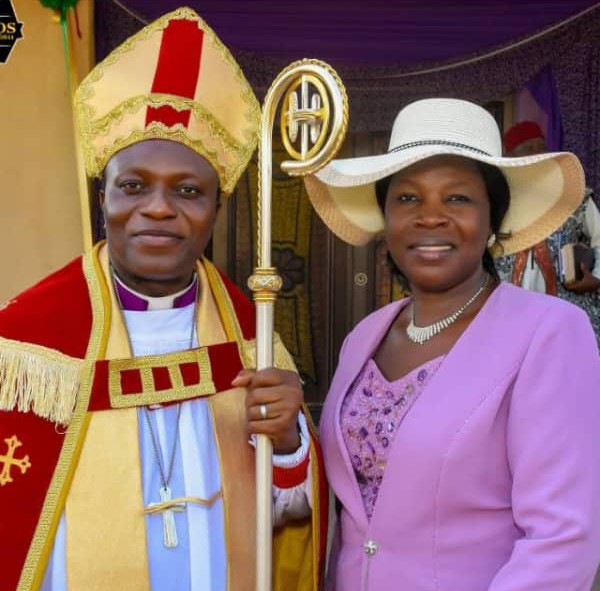 His Lordship, The Rt. Rev’d. Henry Okechukwu Okeke has been enthroned as the third Bishop of Ideato Diocese.
The enthronement service which took place on Tuesday 29th September, 2020 at St. Peter’s Cathedral, Arondizuogu was done following the reading of the Primate’s mandate by the Cathedral Archdeacon, pledge by the Bishop to be faithful to Cathedral statutes and subsequent oaths of submission by lay members of the Cathedral Standing committee, Diocesan Board members and oath  of canonical obedience by clergy of the diocese of Ideato.

The Bishop’s wife, Mrs Julie Okeke read the only lesson taken from Rom.1:8-17. The presentation of the pastoral staff of the diocese of Ideato was done by the newly presented Archbishop of Owerri Ecclesiastical province, The Most Rev’d.  David Onuoha.

In his maiden sermon in his Cathedral titled “One man with the correct gospel”, Bishop Henry Okeke stressed that the purpose of the gospel was well defined in Paul’s epistle to the church in Rome. He declared that the gospel is universal without discrimination based on race, gender, status, class etc. From the beginning to the end of the epistle is flooded with the gospel of salvation.

“Not everything you hear today in the name of preaching is gospel. Ideator people should understand this fact but Arondizogu must champion this course on account of one of their legends late Mr. Abraham Nwokike who went for medical treatment at Iyienu hospital. He was cured of his eye ailment but most importantly he came back with the gospel. He was the one that planted the church in Arindizogu from where the gospel now spread to all the nooks and crannies of this environment”.

Bishop Okeke said that Abraham was an example of one man with the correct gospel. The same thing applies to all public servants in all spheres of life. Politicians, leaders at all level are also holding God’s mandate in making Christ known to the whole world.
He challenged the people to ignore the history of their lives and focus on the transforming power of God like Paul who discounted his past to embrace the course of the gospel noting that it was only on the basis of this he was able to declare that “I am not ashamed of the gospel for it is the power of God unto salvation.”

“The mandate we have in Ideato Diocese is the mandate of the gospel and there will be no compromise. When we lift the gospel to the right place, everything takes its natural level”.
He decried the distorted messages being peddled around and urged the people to embrace Jesus and experience the change he brings.

Bishop Okeke captured his vision for the Diocese of Ideator in this acronym CDU meaning, conversion, development and unity. According to him, only the gospel can convert a soul. He said that if the people of Ideato Diocese will uphold the tenet of conversion, it will not be long before the correct gospel shall permeate to whole area.

He said that community development is part of the gospel mandate and the diocese of Ideato will use the gospel as a tool for development. Bishop Okeke acknowledged that although people have their personal identities but the gospel breaks every wall of partition. He called for unity irrespective of all subsisting local politics. He declared that his interest is on that one man with the correct gospel.

He eulogized the exploits of late Ven. Godwin Ugokwe who gave his life after he was ordained referring to him as one man with the correct gospel whose life made lasting impact on others.
Dignitaries present at the occasion included the former governor of Anambra State State and the Vice Presidential candidate of the People’s Democratic Party in the last general elections, Mr. Peter Obi.

Mr. Peter Obi said he came to identify with Bishop Okeke as a result of a long standing relationship built during the time Bishop Okeke was in Mbamili Diocese. He said his uprightness was what took him to Mbamili 13 times. He pledged to continually support Bishop Okeke in his new endeavour in the Diocese of Ideator.

Mr. Peter Obi called to continue to pray for a turnaround in the affairs of the nation.