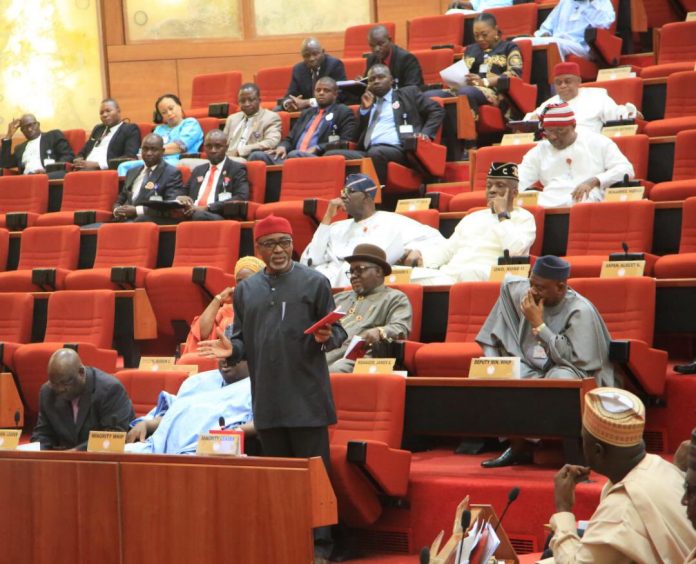 As controversy continues to trail the handling of the Control of Infectious Diseases Bill, 2020 by the National Assembly, Governors of the nation’s 36 states have asked lawmakers to henceforth halt all activities in relation to the Bill.

The Governors, at the 8th COVID-19 teleconference of the Nigeria Governors’ Forum (NGF), expressed discomfort they were not consulted on the Bill, even when they are currently at the forefront of efforts to contain the coronavirus pandemic.

At the NGF’s meeting held on Wednesday: “The governors raised concern with the lack of consultation with State Governments, who are at the forefront of the epidemic.

‘’The forum resolved that the Bill should be stepped down until an appropriate consultative process is held, including a public hearing to gather public opinion and concerns,” the NGF said in a communique issued early on Thursday and signed by its Chairman, Governor Kayode Fayemi of Ekiti State.

Members of the NGF took the decision after they were briefed by Sokoto State Governor and former Speaker of the House of Representatives, Aminu Tambuwal on the content of the Bill and the implication of its passage into law.

The forum proceeded to establish a committee comprising the Governors of Katsina, Sokoto and Plateau to lead a consultative meeting with the leadership of the National Assembly on the proposed Control of Infectious Diseases Bill, 2020, with the NGF secretariat mandated to comprehensively review the Bill and its implication on states.

Members of the NGF were worried about the rising number of coronavirus cases in the country which reached 4,787 as at May 12! 2020 based on an update from the Presidential Taskforce (PTF) on COVID-19.

They also noted, in the communique that “the worrying trend urgently calls for additional measures by state governors to ramp up capacity for testing, increase the availability of isolation beds to at least 300 per State, accelerate the procurement of additional personal protective equipment (PPE) and training for health workers, as well as the continued enforcement of inter-state restriction of movement.

The governors also expressed concern about the impact of COVID-19 on states’ finances and resolved among others, to approach the Federal Government for assistance.

“Following an update on the rising trend of deductions from revenues accruable to the federation account available for distribution to the three tiers of government, the Governors noted the threat this poses on the fiscal capacity of States to respond to the demands of the COVID-19 pandemic.

“Members also raised concern about the ownership and distribution of proceeds from recovered looted funds and accounts or investments funded as first line charge from the federation account.

“The forum agreed to engage with the Federal Government to ensure that the governance arrangement of all federation-funded investments recognise State governments as shareholders in the distribution of proceeds and decision making.

“The forum has followed with interest, the development of the 12-month Economic Sustainability Plan by the Federal Government, which is designed to mitigate the impact of the COVID-19 crisis.

“In the spirit of developing a truly coordinated national response to the crisis, Governors expressed the importance of greater consultation and collaboration between the federal and state governments on development planning.

“A Committee was consequently set up to interface with the federal government on the next Medium-term National Development Plan. The Committee is made up of the Governors of Bauchi, Plateau, Kebbi, Akwa Ibom, Abia and Ekiti.

“A second committee, comprising the Governors of Gombe, Nasarawa, Delta, Ebonyi, Oyo and Kaduna was established to steer the activities of the NGF-NESG Economic Roundtable (NNER) – a sub-national platform of the NGF and the Nigerian Economic Summit Group created to promote sub-national competitiveness through public-private collaboration.

“To fast-track the deployment of e-procurement across States, the Forum will be adopting a Software as a Service (SaaS) model with the Kaduna State government providing the framework agreement that other states can leverage on.”

The NGF said the meeting received a briefing from the Group Managing Director of the Nigerian National Petroleum Corporation (NNPC), Mele Kyari, on the Oil and Gas Industry Intervention Initiative on COVID-19.

Kyar was said to have informed the governors that intervention by players in oil industry was to provide medical consumables to states, deploy logistics and in-patient support systems, and deliver permanent medical infrastructure across the six geopolitical zones.

“Governors commended NNPC for leading the industry to take the initiative and advised the group to prioritize interventions that will boost the country’s testing capacity and the capacity of health workers who are at the frontline of the epidemic.

“The forum wishes him well and looks forward to a fruitful partnership that will support the development of the country.”