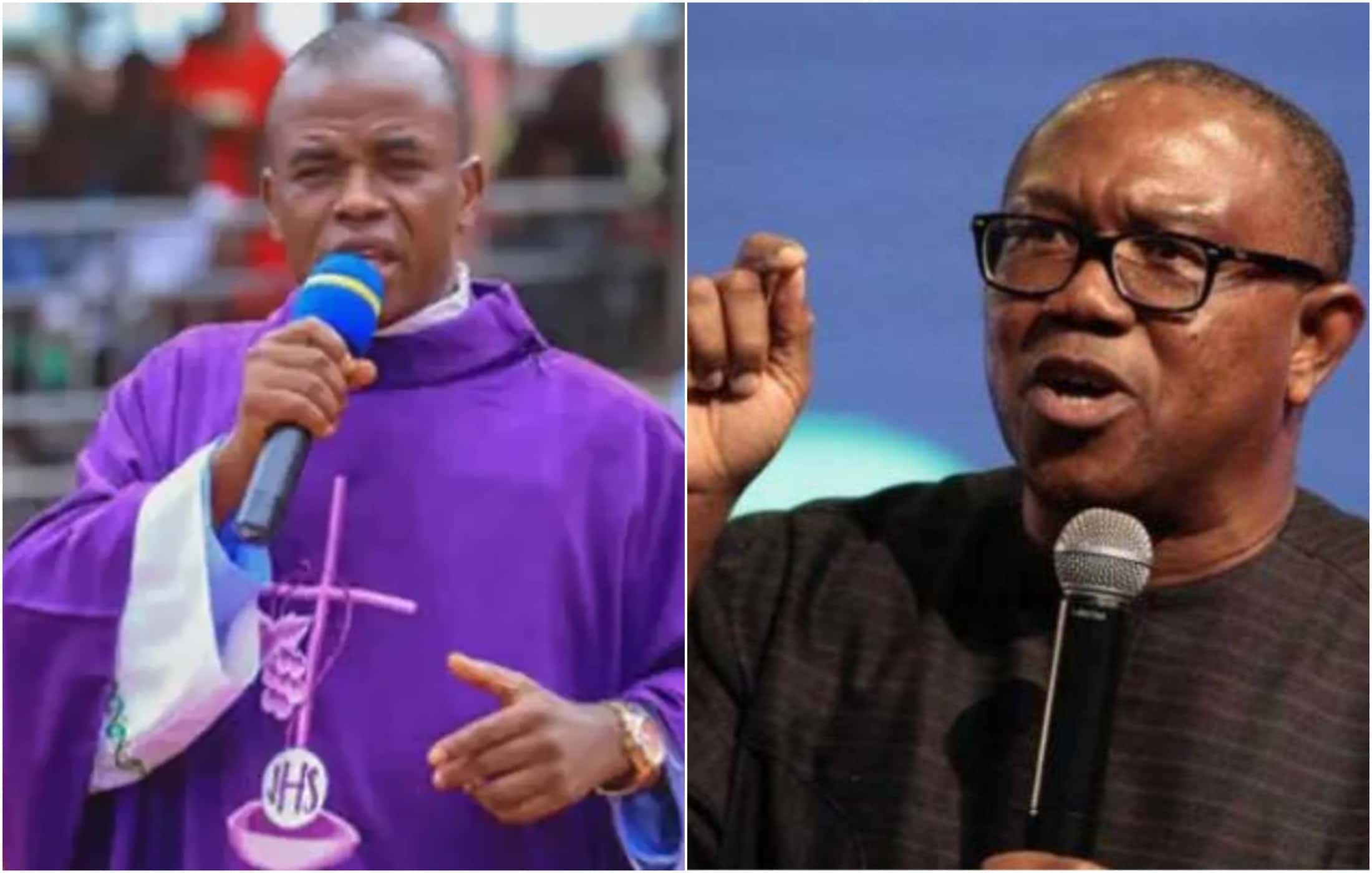 While condemning his statement, Nigerians on micro-blogging site, Twitter, claimed that the cleric tagged the presidential candidate a “stingy man” because he (Mbaka) could not “blackmail Obi emotionally”.

Mbaka attracted online condemnation after he said the former Anambra State governor cannot win next year’s general election because he is “stingy”.

While speaking during one of his programs in Enugu, the cleric maintained that it would be impossible for Obi to become Nigeria’s president, adding that an old man president is better than a ‘stingy young man’.

“A stingy man, that cannot give people his money, with this hunger ravaging the land, and you are saying he is the one you want. Do you want to die of hunger? Are you people insane? Where is the Holy Spirit?

“We want somebody that is serious. Unless Peter comes here to kneel, if he becomes president, he will close down this ministry. What we are doing is spiritual.

“Listen, a good old man is better than a young wicked man; Peter Obi is going nowhere as far as God lives. If Igbos want a representative, it is not someone like Peter Obi.

“I should not have talked but I saw my video going around everywhere as if Fr. Mbaka wholeheartedly came out and apologized.

“No, I didn’t apologize wholeheartedly, it was out of duress. I had to obey my Bishop. In obedience I had to; it is not of my volition. I did it because I am a Catholic priest, my Bishop said, do it, my own is ‘Yes my Lord’.

“I did not say he (Obi) is a bad man; I said he is a stingy man. A hungry man wants someone that is generous; the man has so much money, but he is ‘I, me, myself. But that money will not be useful to him. I am very happy now that I have spoken out. That apology is a poisonous curse against Peter Obi.

“If he is wise he should have come here after that apology to say he is sorry but he waited. Anybody supporting him is wasting his money, he is going nowhere,” Mbaka said.

However, Nigerians on Twitter have knocked the cleric following his comments, asking him to remain apolitical.

Aji Busu @AfamDeluxo said, “On the 07/09/2021 His Excellency, Peter Obi donated ₦100m to Bishop Shanahan Hospital of Nursing and Midwifery, Nsukka. Enugu State. Yet Fr. Mbaka has the effrontery to tag Peter Obi stingy simply coz Peter Obi refused to be emotionally blackmailed in 2018/2019 in his church.”

Reno Omokri also said, “Reverend Father Mbaka don buy the market! At least they may leave me and face him!”

On his part, Pooja said, “I’m not a fan of religious men putting their mouths in politics. Though they have the right because of the complex situation when it comes to religious matters in Nigeria, they should just stay off it. No one will back father Mbaka.”

Everest added, “Mbaka is wrong. Peter Obi is a prudent man. Does not believe in wasting public funds. He is not a stingy man. What we need now is a prudent individual. We have a terrible spending problem. Printing money like there’s no tomorrow. Inflation is now at 17.1%. Think am.

Pastor Blessed Uzoho said, “Even Fr Mbaka couldn’t push Peter Obi to do what he doesn’t want to do even when he told him God was involved and related it with winning the election. Peter stood on his principles. SHI SHI we won’t give. His tenacity and articulated savviness is 100%. Competence! #PeterObi4President2023”

Julius Jide added, “Being my pastor, priest, Spiritual leader, etc doesn’t necessarily make you smarter than me. I won’t challenge your utterances, but I’ll definitely not believe or do it cos you’re standing on the altar in white. Mbaka is bad news both to Igbos and the Catholic church.”

David Onyemaizu said, “I can only blame whoever takes religious leaders like Father Mbaka seriously. Here was a man that said that Buhari is the Messiah of the country. After they stopped greasing his palm, he stopped supporting Buhari. Only a dumb@ss would follow what he says about Peter Obi.”

Kayode Ogundamisi also said, “Rev Fr, Ejike Camillus Anthony Ebenezer Mbaka was doing “fyne bara” to @PeterObi and Obi rightly told him ‘Show me a project to develop in your church, I no dey give shi shi”. On this one o #IstandwithObi Mbaka’s open solicitations is becoming an embarrassment to Catholics.”