The Ondo State Governor, Rotimi Akeredolu, failed to withhold his emotion on Friday at the funeral mass for victims of the terror attack at St Francis Catholic Church, Owaluwa, Owo, Ondo State. 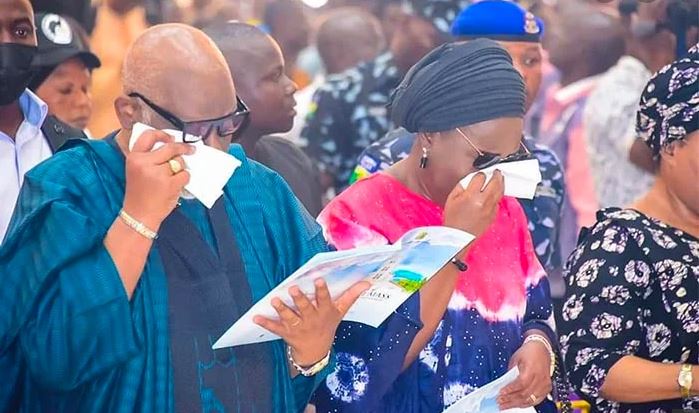 Akeredolu and his wife, Chief Betty Anyanwu Akeredolu attended the funeral mass held at the Mydas Resort and Hotel, Owo.

The teary governor while recounting the terror attack, lamented that the government failed to defend the victims of the attack.

“We have failed to defend these people. Not because we have not tried, but because these forces on the other side are evil and they have support. They will not triumph over us forever,” Akeredolu said.

The governor noted that something must be done in the country, adding that the security architecture of the nation needs rejigging.

“When I see the sea of heads that are here it speaks volumes. What has happened to us in Owo in Ondo state is indescribable. A lot of words are used to qualify it. Dastardly, horrendous. But I still believe there are words to use to describe it but I am still short of those words.

“We have just 22 (deceased) in this hall. A few of them have been buried. Because the relatives couldn’t wait till today. But as at the last count, these animals came to the church and murdered 40 people,” the governor said.

But in a swift response, the Bishop of Ondo Catholic Diocese, Dr. Jude Arogundade, declared that Akeredolu has not failed in protecting his people.

Arogundade said: ”You didn’t fail. You are a strong soldier. Your determination to protect those who voted you into power is unquestionable. This was done by cowards. You have tried your best.”

The cleric wondered why the people of the country need to beg for state police, despite the endless attack and killings.

He thanked the governor for accepting to designate a memorial park in honor of the victims, stressing that those who created the situation that made the incident happen have blood on their hands.

Meanwhile, the expansive hall of the Mydas Resort and Hotel was filled to the brim as families of the victims, people of Owo, and other sympathizers thronged the venue of the funeral mass.

Members of the State House of Assembly, led by the Speaker, Rt. Hon. David Bamidele Oleyelogun also attended the service.

Also, Members of the state executive council, led by the Secretary to the State Government, Princess Oladunni Odu, were present at the funeral mass.

Other dignitaries at the funeral mass included: Former Governor of Ondo State, Dr. Olusegun Mimiko; Chairman of the All Progressives Congress, Engr. Ade Adetimehin; and Chieftain of the APC , Chief Olusola Oke,SAN,

It was reported that Akeredolu had on Thursday warned the Federal Government that its inability to secure life and property in the country would soon leave citizens with no choice but to arm themselves in self-defense.

Akeredolu, who gave the warning while delivering the keynote address at the meeting of the Attorney-Generals of the 36 States of Nigeria held in Lagos, said the police were overwhelmed.

The governor asked the police to “close shop” if the Federal Government could not meet their equipment needs.

Akeredolu insisted that the police had failed in their constitutional role of protecting Nigerians.

“We will carry arms very soon, Oga Malami (the AGF), there is no other way, the police have failed,” the governor declared.