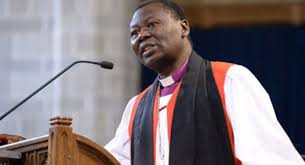 During this period of lockdown and amidst the difficulties brought about by the coronavirus pandemic, Christians have been charged to not allow the suffering of this present time and the challenges they face in life to become all that they see, and cause them to shift their focus from who God is, what He has done, and His promises for both now and the future.

The Most Rev’d Emmanuel Egbunu, Bishop of Lokoja Anglican Diocese gave this charge in an online broadcast, which is the third on his meditation series on Apostle Peter, on the topic, “Facing difficult times with a healthy perspective.”

The Archbishop who pointed out that there is need for believers to have the right perspective when going through difficult times, noted that such times often come with lessons and teachings that are either very helpful or problematic. He opined that in such times, Christians are expected to remain focused and faithful to Christ and to follow His example of perseverance through suffering. He urged believers to focus on what God has done through His Son, Jesus Christ and allow it to control their attitude towards suffering and life’s challenges.

According to the Bishop of Lokoja Diocese, the finished work of the Cross cannot be reversed or terminated in time or eternity; but on the contrary, suffering is temporary, and it would come to an end with time. He asserted that if one persevered till the end, there is a reward.

He said, “Being born again has a reward, and all these sufferings because of our faith is not for nothing; there is a living hope and an inheritance that is imperishable and unfading, which is already kept in heaven for the children of God.”

He reiterated that in difficult times, Christians should focus on what God has done in the past, what He is doing in the present and what He would do in the future; adding that the power of God guards all who put their faith in Him. The cleric mentioned that trials arise to test the genuineness of one’s faith and that it is for a while, to reveal the glory of God in the life of a genuine believer. He however added that even if trials and tribulations result in death, it is not the end; for Christians have a living hope and an eternal reward that cannot die, because Jesus who resurrected from the dead has assured them of resurrection after death.

He said, “If death meets you now, your inheritance is already waiting for your arrival.”

Therefore, Archbishop Egbunu urged believers to put their investments in heaven, because that is where their inheritance is. He enjoined all
Christians who are facing tribulations because of their faith to not lose hope, because God is still in control and would divinely reveal Himself to all who diligently seek Him.