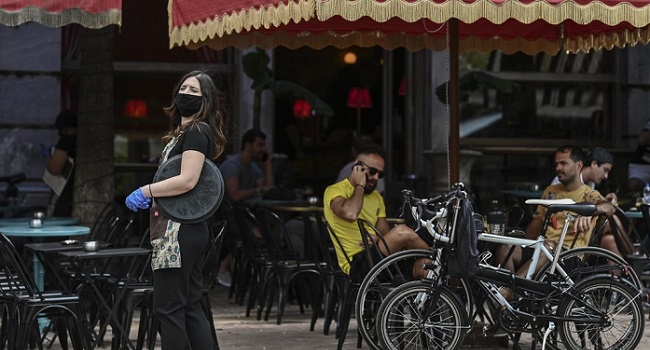 Restaurants and cafes across Greece opened ahead of schedule Monday as the country prepared to launch a shortened tourism season vital to its economy.

But with social distancing rules limiting businesses to around 50 percent capacity, and only outdoor tables allowed, many owners questioned the wisdom of reopening after lockdown of over two months.

“We have to disinfect everything all the time… we’d have to hire someone to clean up and keep track of the customers… but are unable to do that,” cafe owner Vangelis Daskalopoulos told AFP in Athens.

“I don’t know how we’re going to manage,” he said, adding that he was torn between his fear of the virus and the need to keep his business running.

In cafes like his, a mandatory minimum distance of between 70 cm (28 inches) to 1.7 meters (5.5 feet) between seats is required, and a maximum of six seated customers per table is allowed.

Despite the misgivings of some like Daskalopoulos, patrons were happy for the chance socialise in cafes again.

“The cafe in Greece has a social dimension, it’s where the heart of the district beats,” he said.

But some three in 10 cafes or restaurants were predicted to stay closed out of fear of slow business, Nikos Nifoudis of the Thessaloniki Catering Initiative told Athens News Agency over the weekend

“The sector is very anxious to see how returning to business will play out… no one can predict how confident customers are to return to cafes and restaurants,” he said.

Eateries were originally slated to open June 1, but the slow spread of the pandemic in Greece allowed the date to be moved forward.

The country of 11 million has so far recorded fewer than 180 coronavirus deaths.

Since May 4, Greece has progressively opened tourism-related businesses following a lockdown imposed in March to stave off an economic contraction that could reach 13 percent of output this year.

Paid beaches opened on May 16, while ferry travel to the islands was permitted on Monday. Year-round hotels are to resume operations on June 1, followed by seasonal hotels on June 15.

Flights into Athens will restart on June 15, and to the rest of Greece’s regional and island airports on July 1.

But Daskalopoulos is worried about the risks incoming travellers may pose.

“People will come from countries that have a greater number of infections (than Greece’s) and will not even be checked,” he said.

The EU has said holidaymakers could be asked to wear face masks on planes, respect social distancing on the beach and even book slots to use hotel pools.

Greece had initially wanted incoming tourists to submit to tests at least 72 hours before travel, but Brussels frowned at the suggestion.

Athens now says it will not require travellers to undergo virus testing or quarantine, but sample tests will be carried out for epidemiological purposes.

Restaurants were shuttered on March 14, two days after Greece recorded its first COVID-19 death, with only takeout food and delivery allowed.