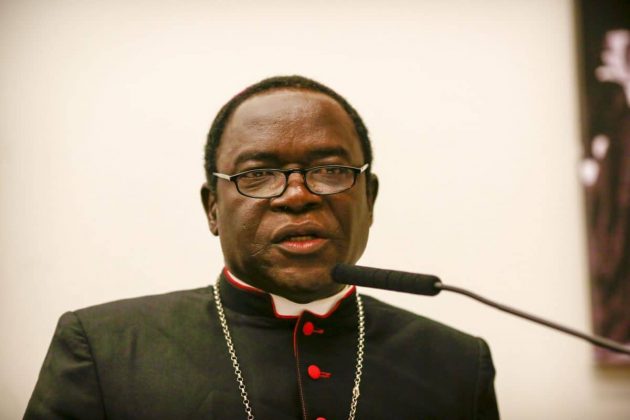 The Bishop of Sokoto Diocese, Matthew Hassan Kukah, has described Nigeria as a nation like a ship, stranded on the high seas, rudderless and with broken navigational aids.

Speaking at the funeral mass of Seminarian Michael Nnadi at Good Shepherd Seminary, Kaduna, Bishop Kukah reminded the congregation, “We have gathered around the remains of Michael in supplication but also as solemn witnesses to the penetrating darkness that hovers over our country.”

Bishop Kukah explained, “Today, our years of hypocrisy, duplicity, fabricated integrity, false piety, empty morality, fraud and Pharisaism have caught up with us. Nigeria is on the crossroads and its future hangs precariously in a balance.”

He said, “The immediate family of Michael and the Church lived through the torments of the brutal, harsh and senseless haranguing of the kidnappers who are totally empty of any show of human emotions.

“This is a solemn moment for the body of Christ. This is for us the moment of decision. This is the moment that separates darkness from light, good from evil.”

He noted with concern, “Nigeria is on the crossroads and its future hangs precariously in a balance. It is time to confront and dispel the clouds of evil that hover over us.”

Bishop recalled that Buhari was voted for in 2015 on the grounds of his own promises to rout Boko Haram.

“In an address at the prestigious Policy Think Tank, Chatham House in London, just before the elections, Buhari told his audience: ‘I as a retired General and a former Head of State have always known about our soldiers. They are capable and they are well trained, patriotic, brave and always ready to do their duty.

‘If am elected President, the world will have no reason to worry about Nigeria. Nigeria will return to its stabilizing role in West Africa. We will pay sufficient attention to the welfare of our soldiers in and out of service. We will develop adequate and modern arms and ammunition.

‘We will improve intelligence gathering and border patrols to choke Boko Haram’s financial and equipment channels. We will be tough on terrorism and tough on its root causes by initiating a comprehensive economic development and promoting infrastructural development…we will always act on time and not allow problems to irresponsibly fester. And I, Muhammadu Buhari, will always lead from the front.’”

Bishop Kukah admitted, “There is no need to make any further comments on this claim. No one in that hall or anywhere in Nigeria doubted the President who ran his campaign on a tank supposedly full of the fuel of integrity and moral probity.

“No one could have imagined that in winning the Presidency, General Buhari would bring nepotism and clannishness into the military and the ancillary Security Agencies, that his government would be marked by supremacist and divisive policies that would push our country to the brink.

“This President has displayed the greatest degree of insensitivity in managing our country’s rich diversity. He has subordinated the larger interests of the country to the hegemonic interests of his co-religionists and clansmen and women. The impression created now is that, to hold a key and strategic position in Nigeria today, it is more important to be a northern Muslim than a Nigerian.”

Regretably, he said, “Today, in Nigeria, the noble religion of Islam has convulsed. It has become associated with some of worst fears among our people. Muslim scholars, traditional rulers and intellectuals have continued to cry out helplessly, asking for their religion and region to be freed from this chokehold.

“This is because, in all of this, neither Islam nor the north can identify any real benefits from these years that have been consumed by the locusts that this government has unleashed on our country. The Fulani, his innocent kinsmen, have become the subject of opprobrium, ridicule, defamation, calumny and obloquy. His north has become one large grave yard, a valley of dry bones, the nastiest and the most brutish part of our dear country.

“Why have the gods rejected this offering? Despite running the most nepotistic and narcissistic government in known history, there are no answers to the millions of young children on the streets in northern Nigeria, the north still has the worst indices of poverty, insecurity, stunting, squalor and destitution.”

He recalled that His Eminence, the Sultan of Sokoto, and the Emir of Kano are the two most powerful traditional and moral leaders in Islam today.

“None of them is happy and they have said so loud and clear. The Sultan recently lamented the tragic consequences of power being in the wrong hands. Every day, Muslim clerics are posting tales of lamentation about their fate. Now, the Northern Elders, who in 2015 believed that General Buhari had come to redeem the north have now turned against the President,” he added.

“It was also the reason they formed a political platform called, the Non-Muslim League. All of us must confess in all honesty that in the years that have passed, the northern Muslim elite has not developed a moral basis for adequate power sharing with their Christian co-regionalists.

“We deny at our own expense. By denying Christians lands for places of worship across most of the northern states, ignoring the systematic destruction of churches all these years, denying Christians adequate recruitment, representation and promotions in the State civil services, denying their indigenous children scholarships, marrying Christian women or converting Christians while threatening Muslim women and prospective converts with death, they make building a harmonious community impossible.

“Nation building cannot happen without adequate representation and a deliberate effort at creating for all members a sense, a feeling, of belonging, and freedom to make their contributions. This is the window that the killers of Boko Haram have exploited and turned into a door to death. It is why killing Christians and destroying Christianity is seen as one of their key missions.”