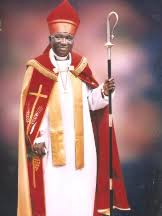 The Most Rev’d Dr Caleb A. Maduoma, Archbishop of the Ecclesiastical Province of Owerri and Bishop of Ideato Anglican Diocese has charged members of the diocese, as well as Christians, to depend on the Living Word of God, who is Jesus Christ, the Saviour.

He gave this charge at the First Session of the Eighth Synod of the diocese, which was held at St. Paul’s Anglican Church, Urualla, Ideato-North LGA in Imo State. The Archbishop who is set to retire in September boldly declared that he had fought the good fight, finished the race, and kept the faith.

He described the Christian race as a relay race, where a time comes when its leadership must hand over the baton to other good leaders to continue the race, under the Master and Lord Jesus Christ.

Archbishop Maduoma said, “Since our translation from the Diocese of Okigwe South in 2004, we have laboured in the Diocese of Ideato to keep it stable. We have persevered in loyalty to Christ alone, contending with all kind of adversaries within and outside the Church; to defend the gospel, which was handed over to us. When we look back, not only within the period we served the Diocese, but also since our answer to the call of the sacred ministry in 1980, we have nothing to regret.”

Speaking on the theme for the Synod, “Fight the good fight of faith with all thy might”, Archbishop Maduoma explained that life is full of wars to be fought and dangers, which the people of God must confront boldly face to face. He said these dangers are there to frighten and distract children of God from finishing the race victoriously; adding that Christians are called to defend the gospel in whatever occupation God has placed them. Therefore, he urged believers to put on the full armour of God, so that when the day of evil comes, they would be able to stand their ground.

On his achievements so far, Archbishop Maduoma said, “That ‘I’ in me must die! Whatever we have achieved all these years was by the grace of God alone. I have nothing to boast about. We are satisfied with Jesus and we thank Him for leading us in our ministry. He never failed me. We have represented Christ and His Church faithfully as a deacon, a Priest, a Bishop and Archbishop.”

“We have guarded the faith; we have maintained unity and discipline of the Church; we have faithfully proclaimed the word of God; we have acted in the name of Christ for the reconciliation of the world and building up of the Church. We have ordained others to continue Christ’s ministry. Permit me to say that we did influence many servants of God in the ministry today, within the Anglican Church and beyond the Anglican Church, teaching them to follow in Christ’s footstep. My testimony is contained in the book that will be launched at my retirement,” he added.

The Bishop of Ideato diocese observed that today, many live in fear of the unknown; therefore, he enjoined all to look to Jesus, who is the Saviour of Mankind.