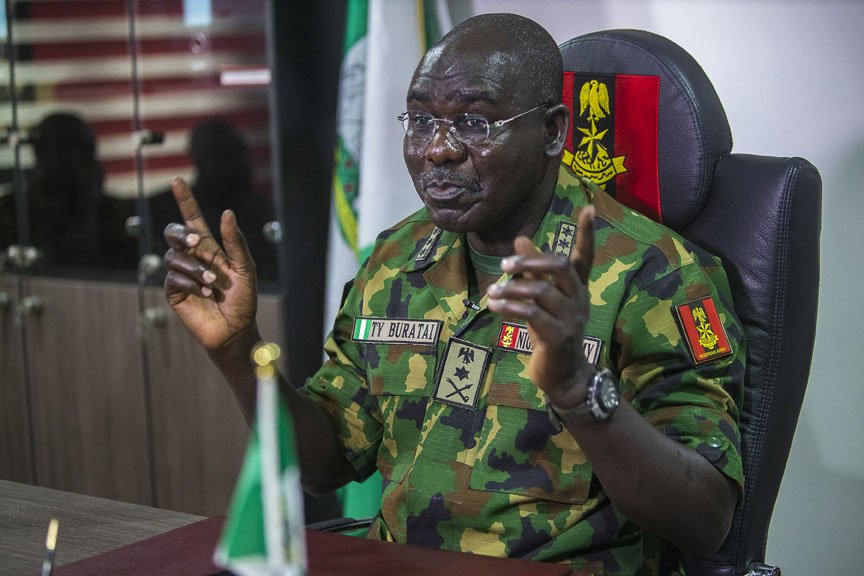 The Chief of Army Staff (COAS), Lt. General Tukur Buratai, has challenged troops in the North-west theatre of operation to brace up for the final defeat of bandits and kidnappers terrorising the region, saying there is no excuse for failure.

This is coming as the Emir of Katsina, Dr. Abdulmumini Usman, has called for the establishment of military barracks and cantonments in frontline local government areas of the state to tame insecurity.
Buratai warned the troops of impending grave consequences if they abandon their positions in the face of superior firepower from bandits, who have been launching deadly onslaughts on communities within the zone.

The COAS gave the warning on Sunday night in Batsari Local Government Area of Katsina State, while addressing Special Forces fighting bandits in the area shortly after a special dinner with them.

Buratai is in Katsina State on operational tour to military formations, where he visited 17 Brigade, Katsina; 171 Battalion, Daura; Special Forces Camp in Batsari and the proposed military barracks’ site in Daura.
He also paid a courtesy call on Governor Aminu Bello Masari; Emir of Daura, Dr. Farouk Umar; Usman and the District Head of Batsari, Alhaji Tukur Mu’azu, among others.

He reiterated that there is no excuse for failure in military operations, urging the troops to adopt all the needed tactics and operational techniques required in the war to end banditry in North-west, particularly in Katsina State.
He added that the insecurity bedeviling the states in the region is unpredictable and asymmetric in nature, hence the need for the personnel to use their training skills to end the scourge.

Buratai said the Nigerian Army had taken delivery of more equipment and platforms that would be deployed in various theatres of operations, including Katsina, to enhance the speedy completion of the ongoing war against banditry and insurgency.

He said: “There is no excuse for failure in military operations. Whatever happens, you must try your best to achieve results by applying all the techniques, tactics, and procedures that are required in battle craft and operational techniques.

“This is the best way for us to deal with these criminals. I assure you that we have a lot of equipment that is on the way, including additional ammunition, weapons, platforms, and vehicles.
“This type of conflict is unpredictable and asymmetric in nature. In this context, you know that the best approach to handle the conflict is to apply the same asymmetric concept and that is why we made tremendous efforts to make sure that you received the special training.

“We will continue to train and motivate you to be able to handle this challenge squarely. We know the terrain is very wide; we know some limitations. We urged you to remain committed and continue to apply the training that you received to ensure that these criminals are dealt with.”
He also assured the people that farmers displaced from their ancestral homes by the marauding bandits would soon return to continue with their farming.

Meanwhile, the Emir of Katsina has called for the establishment of military barracks and cantonments in frontline local government areas of the state to tame the insecurity.
He said the existing barracks could not serve the population of the war front and nearby local governments in circumstances that require rapid response.

The emir, while hosting Buratai in Katsina, stressed the need for urgent actions to be taken to establish the barracks to further enhance the security of the areas.
In the past month, more than 200 people have been massacred and scores kidnapped in fresh onslaughts orchestrated by bandits in frontline LGAs of Faskari, Dutsinma, Danmusa, Safana, Batsari, Sabuwa, Jibia, Kankara, Dandume.

The renewed attacks have forced thousands of residents of the affected local governments who survived the deadly invasions to flee their ancestral homes to the headquarters of the council areas, including Katsina, the state capital.

Usman said: “These frontline local government areas are vulnerable to banditry and kidnapping due to low-security presence. So, the establishment of the military barracks or cantonments will assist greatly in ending insecurity facing my people there.”

According to the monarch, it is the sole responsibility of government to protect the lives and property of its citizens.
While lamenting the banditry in communities across the state, the emir said traditional rulers would continue to support the military to eliminate the bandits.