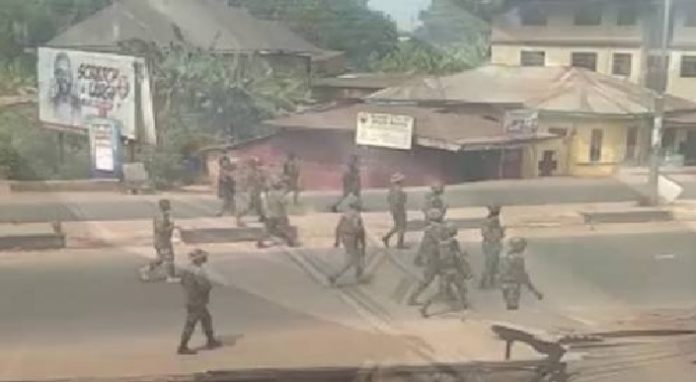 Ezeife condemned the Nigerian government for sending troops to kill and arrest defenceless citizens, and accused the Imo State Governor, Hope Uzondinma, for allegedly inviting the army to torture the people he claimed to be leading.

Ezeife said this in an exclusive interview with SaharaReporters on Tuesday following recent military raids in Orlu.

The Nigerian Army on Tuesday admitted carrying out airstrikes and ground attacks in search of members of the Eastern Security Network and Indigenous People of Biafra.

Reacting to the raid, Ezeife said, “Many of us from the South-East are tired of speaking about the issues in this part of the country. It is as if the federal government does not want the South-East to belong to Nigeria.

“The federal government seems to be the greatest actor thinking about the disintegration of Nigeria. How do you understand air bombardments and ground attacks on the civilian people that have done nothing illegal? It is not news that all manner of military personnel and security agents have been used against the South-East. We have been denied projects and appointments going around the country. There are politics and policies of ‘Pull Igbo Down’ from the federal government.”
He also said “it is so obvious if you go and conduct a referendum in the South-East on whether to stay or not to stay in Nigeria, you will find those who say not to stay are on the increase. And some of us talking about one Nigeria are increasingly looking like fools because the federal government is not relenting in adopting an isolationist policy against the Igbo”.

The elder statesman berated the Imo governor for inviting the military to the region.

Uzodinma had said, “That’s why our government decided to invite the military to flush out IPOB and their so-called ESN. We discovered that there was a camp which IPOB established at Umutanze, Orlu and we sent police to dislodge them.”

Ezeife said, “I don’t know the kind of things going on in Imo State for Uzondinma to have uttered that statement that he invited the military for the raid in Orlu. I don’t know how the current leadership in Imo emerged. I’m shocked to have read that the governor was aware of the attacks on innocent lives by the federal government.

“What is worse than that? Maybe he is only covering up for the federal government for saying that he invited the military forces. If he did that, he can’t be the leader of the people. It means he’s trying to kill the people he is leading.

“I really don’t know what to talk about because all forms of humiliations, denials, exclusions and marginalisation in the system are directed at the South-East region.”

Speaking about the agitation of the IPOB leader, Nnamdi Kanu, to see the realisation of Biafra, Ezeife noted, “About Kanu, some of us don’t want to leave Nigeria. And some of us believe that no group whether Fulani, Hausa, Yoruba, Igbo or any other group in the country benefits from the disintegration of Nigeria.

“How do we go when there is disintegration? You carry your property and live where? We, Igbo, need a lot of space. We spread and do business and Nigeria is suitable for this.

“The younger ones talking about Biafra are reacting to the problems posed against the South-East by the federal government. But we the older ones have seen this problem and think it’s going to be over. It is better for us in the long term to be in Nigeria than to be in one tiny place.

“We are in trouble but we don’t want Nigeria’s disintegration. One of the good things that have happened is when the northern governors are adopting lawfulness in the issue of herdsmen. They have adopted the ban on open grazing, and that gives hope that we can survive in the country if we think fairly of others.”