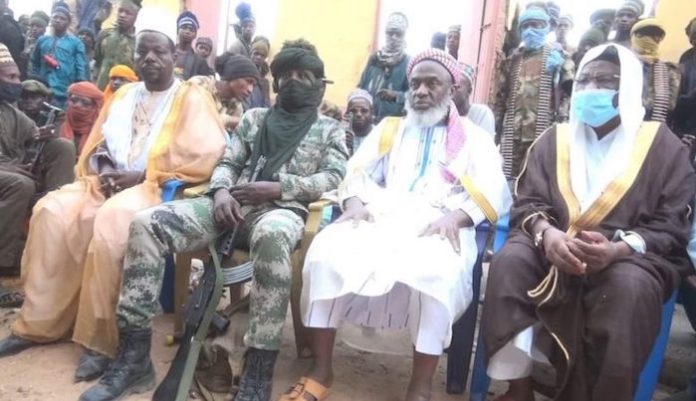 Nigerians on Tuesday called on the Federal Government to order the arrest and investigation of popular Islamic scholar, Sheikh Ahmad Gumi, over his interactions with bandits in the country.

Of late, Sheikh Gumi has been seen in photos holding talks with notorious bandits in the forests of Zamfara, Niger and other states. He had also advocated blanket amnesty for the bandits like was done for the militants in the Niger Delta region.

The PUNCH also reported that Sheikh Gumi said bandits had only killed a “few” people accidentally, adding that they killed for “revenge”.

Sheikh Gumi’s latest comment attracted outrage on social media with many users describing him as the spokesperson for bandits in the country.

A Twitter user, @FolarinCharles, expressed shock at the utterance of the cleric. “What is coming from Gumi is unexpected. He said the bandits are only interested in payment of ransom and their killings is usually accidental. Haba, what does the bandits do to those that cannot pay the ransom? They just kill them without looking back,” he wrote.

“If this were US (the United States), this man would have been thrown into jail…he is their coordinator,” @YourfavLollipop alleged.

Another tweep, @Greatrufus1, stated, “Sheikh Gumi has assumed the role of patron and spokesman for bandits across Nigeria. Let’s see where that leads them.”

This man’s task of painting those killers saints is dead on arrival,” @ElafikwuSunday added.

@UncleGoodBoy said, “If Gumi was a Southerner, he would have been arrested by DSS (Department of State Services).”

Also, some Facebook users were irked by the recent comments and activities of the cleric, calling on the security agencies to arrest him immediately for questioning.

yamu Moses commented, “Nigeria is finished. For this man to still be moving freely after meeting the murderers and terrorists, it shows that Nigeria is in a deep mess.”

“This man should be investigated, it is obvious he knows too much about these people,” Jean-Philips Aka said.

On her part, Ann Chiagolum, urged the government to “take this Sheikh to rehab before it is too late.”