Old rivals square up in FA cup at Wembley 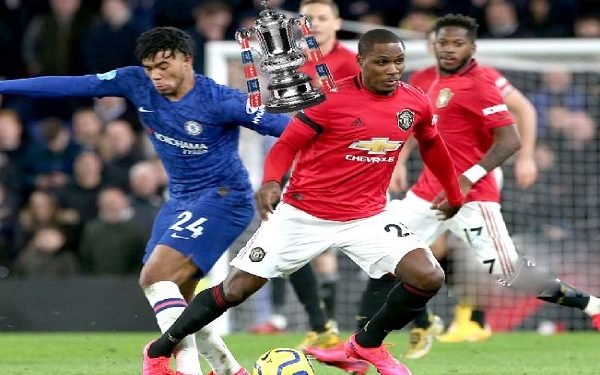 The weekend cannot get any better for English football fans with two high-profile FA Cup encounters for the hallowed Wembley Stadium. The prestigious domestic football tournament in England which has reached its semi-final stage will see defending champions Manchester City take on Arsenal today at Wembley while Chelsea face Manchester United tomorrow at the same venue.

The most successful side in FA Cup history, Arsenal will have an uphill task against a star-studded Manchester City, who have already beaten the Gunners twice in the Premier League this season.

While Manchester City may have lost their Premier League crown to Liverpool, City manager Pep Guardiola will be eager to defend the FA Cup to add more to his silverwares with the Citizens. His side has already won the Carabao Cup earlier in March and are still in the race for the Champions League.

However, the 13-time FA Cup winners will be optimistic considering their record in the tournament where they have never lost to the Citizens.

The last time Arsenal took on Manchester City in the FA Cup was in the 2016-17 semi-final, where the Gunners came from a goal down to win 2-1 in extra time.

Apart from being the most successful team in the FA Cup, The Gunners are tied with Manchester United for most appearances in the final-20.

City have lifted the FA Cup six times and finished as runners-up on five other occasions. City’s 11 finals appearances are tied for the seventh most all-time. Manchester City are the defending FA Cup champions having destroyed Watford 6-0 in last year’s final. City beat Port Vale, Fulham, Sheffield Wednesday, and Newcastle to reach the semi-finals.

Arsenal hosted the Premier League champions, Liverpool, and came away with a 2-1 win in their last League outing while Manchester City didn’t make it easy on themselves, but they did come away with a 2-1 home win over relegation candidates Bournemouth.

Yet ESPN’s James Olley argued: Mikel Arteta is perhaps the perfect man to try and drag Arsenal out of Manchester City’s shadow, given he is embarking on the same journey in his own managerial career. The Gunners have not won any of their previous seven meetings, dating back to the last time they met in the world’s oldest cup competition.

It was at the semifinal stage in April 2017 that Arsene Wenger’s Arsenal edged past a City side yet to complete a full season under Pep Guardiola, flanked in the dugout by Arteta, then his right-hand man.

The Gunners booked their place in the final with a 2-1 extra-time win that still stands as an atypical Arsenal performance: they sat deep, counter-attacked with precision, physically outlasted their opponents and won the tactical battle.

Arteta spoke this week about the big gap between Arsenal and the top sides, something that has been borne out in results against City of late. They have been soundly beaten on each of their previous seven meetings, losing by three goals on four occasions and only scoring twice. In six of those games, City has scored at least once inside the first 20 minutes. Twice, Arsenal were breached inside the first two minutes.

The inferiority complex is palpable. City quickly look to impose themselves against any opposition, and obviously Arsenal have plenty of company in finding themselves overwhelmed on occasion, but Arteta is seeking to alter what Wenger often described as a “mental block” against the big teams. After all, the Gunners’ away record against the top sides remains appalling for a team with Champions League aspirations.

But Arteta firstly has to galvanise Arsenal, bring them together in a common cause and, frankly, extract a consistently high work-rate which has been absent in previous years. Arteta summed up how short-term gains can help bridge the gap.

“You only need to look at the difference between the two teams and the gap is enormous,” he said. “The gap in many areas, we cannot improve it in two months but the gap between the accountability, the energy, the commitment and the fight of the two teams is equal.

“Before it was not like this and I am very proud of that. The rest will take some time but at least we’ve got it now and my message to the players is with that, we can create something.”

Meanwhile, the second match tomorrow between Manchester United and Chelsea has already generated heated argument between the old rivals.

Manchester United manager Ole Gunnar Solskjaer said it was unfair that Chelsea have an extra two days to prepare for this particular match.

The 1999 treble hero won numerous trophies with the club during his playing days but has yet to seal silverware during his time in the Old Trafford dugout.

United are the bookmakers’ favourites to lift next month’s Europa League, when they could complete a double if they can make it past Chelsea and go on to win the FA Cup.

But Solskjaer’s side head into today’s Wembley semi-final at a disadvantage due to the scheduling.

While Chelsea played Sheffield United last Saturday and won 1-0 against relegated Norwich on Tuesday, United head to Wembley on the back of Monday’s 2-2 draw with Southampton and that trip to Crystal Palace on Thursday.

“There is a concern, obviously, that they’ve had 48 hours’ more rest and recovery than us,” Solskjaer said. “It’s not fair. We spoke about a fair scheduling going into this restart. Of course it isn’t.”

With both teams racing for a UEFA Champions League spot for next season, the FA Cup will be an opportunity to add silverware before their respective European campaigns resume.

The Red Devils have faced the Blues on 11 occasions in the FA Cup winning five times. The last time these both sides met was in the sixth round of the 2018-19 FA Cup campaign when Manchester United won comfortably.

However, with victories over heavyweights Liverpool and Leicester City in their last two FA Cup rounds, Chelsea will approach the match riding high on confidence.

Manchester United needed extra time to defeat Premier League bottom-dwellers Norwich City 2-1 in a spirited match in the last round last month and Ole Gunnar Solskjaer admitted that the team’s performance was under-par.

“But I am delighted we are into the last four and it was a good workout, we got some minutes for a lot of players. We are through and that is what counts in the Cup.”

Solskjaer’s side looked a touch overconfident in the second half against Southampton on Monday while Chelsea has looked shaky in two consecutive outings, a 3-0 loss to Sheffield United before bouncing back with a narrow 1-0 win against basement side Norwich City three days later.