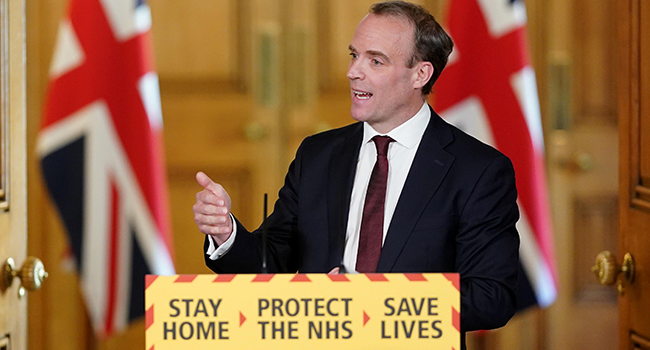 Restarting the Premier League would be a boost to Britain’s morale amid the coronavirus crisis, Foreign Secretary Dominic Raab said on Tuesday.

Premier League chiefs have targeted a June return to action as they bid to finish the season over the summer.

England’s top-flight has been suspended since March 13 and there are still 92 matches remaining, with the title, relegation and Champions League qualification all to be resolved.

Some critics have questioned whether the Premier League is trying to return too soon after the top tier seasons in France and the Netherlands were abandoned.

But Raab sees merit in the Premier League’s ‘Project Restart’.

“I think it would lift spirits of the nation and people would like to see us get back to work and children can go to school safely but also past times like sport,” he said during a government press conference.

“I know the government has had constructive meetings with sports bodies to plan for athletes return to training when it’s safe.”

However, Raab emphasised sport in Britain could only resume once it can be done safely.

“I can tell you that the Culture Secretary has been working on a plan to get sport played behind closed doors when we move to second phase so that is something we are looking at,” he said.

“Of course, the key point though, we can only do it when the medical advice and scientific advice is that it can be done safely and sustainably but certainly that is something under active consideration.”