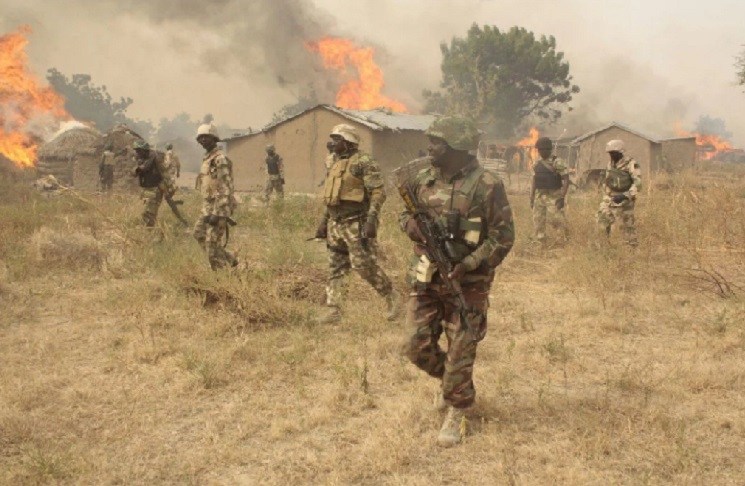 The Military High Command said yesterday that the combined operations of the Armed Forces of Nigeria across troubled spots in the country resulted in the killing of 343 terrorists in the North-east and 153 armed bandits in the North-western part of the country in the last two months.

It said troops discovered 61 illegal refineries, recovered over three million litres of stolen crude oil and petrol from illegal oil bunkerers during naval operations in the Niger Delta region while 18 hostages and 17 kidnapped victims were liberated within the period under review.

At a media briefing in Abuja, Coordinator, Directorate of Defence Media Operations, Major General John Enenche, who reviewed the operations of the armed forces from March 18 to May 5, 2020, said the onslaught against criminal elements in the country within the period was a joint effort of the Army, Navy, Air Force and other security agencies.

He said human and technical intelligence confirmed that 18 Boko Haram and ISWAP leaders were killed following ground and air offensive mounted against their settlements and hideouts while another one was killed three days ago.

He said villages attacked during the period were rescued by troops as normalcy returned to the affected areas while Intelligence Surveillance and Reconnaissance (ISR) missions were conducted , which revealed criminal hideouts and activities of insurgents and bandits.

“Consequently, a number of air interdictions were conducted, which led to the destruction of several Boko Haram logistics facilities and compounds housing some of their leaders including Abu Usamah and a number of their fighters who were eliminated.

“Similarly, a total of 343 BHT/ISWAP fighters were killed and several others suffered various degrees of gunshot wounds with narrow chances of survival”, he said, adding that “this is in addition to several others, including their key leaders, killed by air bombardments”.

He affirmed that most of the Boko Haram’s logistics installations and networks were destroyed even as 16 of their informants and logistics suppliers were arrested.

“At the call of this duty, some of our troops paid the supreme prize and others were wounded in action”, he said.

On the war against armed banditry in the North-west conducted through Operation Harandaji, Enenche asserted that the combined effort of the land and air components as well as other security operatives of the operation provided security for lives and properties.

“Several bandits’ locations and hideouts were cleared with close air support provided by the Air Force.

“In all, a total of 17 kidnapped victims were rescued and united with their families and 146 bandits were neutralised in Katsina and Zamfara States. Troops recovered several arms and ammunition among other equipment”, he said.

On combined operations of the armed forces led by the Nigerian Navy in the Niger Delta region, he said 61 illegal refineries were discovered within the period under review.

He said fishing trawlers were also arrested and handed over to NIMASA while maintaining that 15 hostages were rescued just as 11 crew members of a hijacked Portuguese vessel were freed in collaboration with the Naval team of the Republic of Benin.

“From our operations within the period reviewed, it is obvious that the Armed Forces of Nigeria is winning the war against the enemies of our great country.

“Consequently, the Armed Forces of Nigeria will remain resolute and highly committed to end the insurgency in the country. It will sustain the offensive and will not relent until peace is restored to every troubled region of our beloved country”, Enenche said.