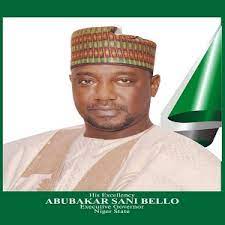 Governor Abubakar Sani Bello of Niger State and Chairman North Central Governors Forum (NCGF), has expressed shock and sadness over the recent reports of abduction of innocent persons by armed bandits in several communities across three Local Government Areas of Rafi, Wushishi and Bida in the state.

It could be recalled that gunmen suspected to be armed bandits invaded Tegina community in Rafi Local Government Area, shot one person dead and left one seriously injured as well as kidnapped an unconfirmed number of Islamiyya Students and Teachers from Salihu Tanko Islamic School alongside some passengers of a Sharon Commercial Bus travelling to Minna.

Governor Sani Bello, in a statement, expressed outrage at the escalating level of banditry in the state, while reiterating his emergency call on the Federal Government for prompt intervention.

“The situation has reached crisis level, in fact, it’s a war situation that we have to confront without further delay,” the governor stated while also stating that the state government was still searching and conducting House-to-House headcount to ascertain the exact number of children abducted.

Reports also have it that the gunmen, on about 70 Motorcycles, attacked 17 communities in Wushishi Local Government Area of the state where they shot several persons while some women and children drowned as they tried to escape across River Kaduna, by jumping into the river in order to escape being killed by the bandits at the weekend.

Findings revealed that more than 10 persons were reportedly receiving treatment at the Wushishi General Hospital even as the search was still ongoing for many missing persons from Babako, Tashan Girgi, Kwakwagi, Fakara, Ndiga, Buzu, Akare, Kala Kala, Agwa, Anguwan Gizo, Tsamiya and other neighbouring villages attacked by the Bandits.

The governor, however, described as unfortunate and unbecoming of the serial attacks and assured that the Joint Military Taskforce have been mobilised and were already tracing the tracks of the criminals for possible isolation and ambush.

Governor Sani Bello further appealed for calm and restated the strong resolve of the state government to continue to protect the lives and property of the citizens as a matter of utmost importance and priority.

Meanwhile, 11 children who were too small and couldn’t walk, among the kidnapped Islamiyya Students, were said to have been released by the gunmen as reports also indicated that the IDPs of Central and Model Primary Schools, as well as Government Secondary school in Wushishi, were returning back to their communities following the return of normalcy.