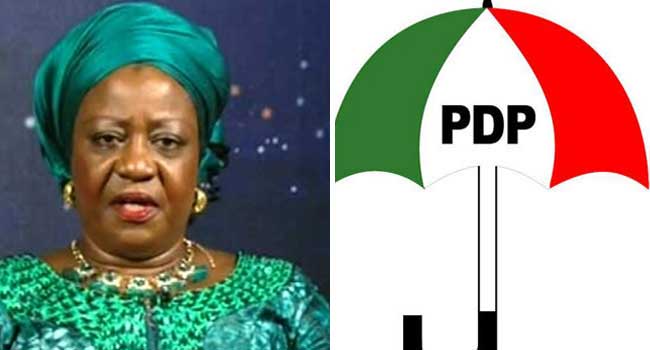 The Peoples Democratic Party (PDP) has hailed the Senate over the rejection of Lauretta Onochie as a national commissioner in the Independent National Electoral Commission (INEC), describing it as a victory for Nigerians and democracy.

On July 8, the Senate Committee on INEC commenced the screening of the presidential aide on Social Media and four other nominees appointed by the President. They are Kunle Cornelius, Saidu Ahmad, Sani Adam and Baba Bila.

Five days after, the upper chamber rejected Onochie’s nomination following the massive outcry that trailed her nomination, especially from members of the opposition and civil society organisations who claim she is a card-carrying member of the ruling All Progressives Congress (APC).

Reacting, the PDP in a statement by its spokesman, Kola Ologbondiyan, said the “rejection of Lauretta Onochie by Nigerians has saved the nation from very serious crisis as well as salvaged INEC and the entire Nigerian electoral process from a ruinous pollution that would have led to the collapse of our democratic order.”

He noted that “Onochie’s vexatious nomination, in total affront to paragraph 14 of the 3rd schedule of the 1999 Constitution (as amended), was a very dangerous machination by the Buhari-led APC Presidency against our electoral process, in the attempt to subvert the will of the people in the 2023 elections.”

The opposition party accused the All Progressives Congress (APC) of plotting to rig the 2023 general elections, noting that the ruling party “is aware that it will have difficulties winning election at any level in a free, fair and credible election.”

Ologbondiyan also commended Nigerians including civil society organizations, the media as well as other political parties, for joining forces with the PDP in fighting for the sanctity of our electoral process by resisting Onochie’s nomination.

He explained that the stiff resistance displayed by Nigerians across board “underscores their collective and unwavering determination to resist and kick out the APC in 2023, despite its shenanigans.”

While urging Nigerians not to rest on their oars, the PDP wants the masses to continue the fight for the nation’s democracy, particularly in further resisting the attempt to alter the Electoral Act to prohibit direct electronic transmission of elections results from polling units.

“It is clear that the APC is pushing for the prohibition of electronic transmission of results because it seeks to use its usual malpractices alteration of figures, switching of results as well as disappearance of ballot materials while on transit to collation centers to, again, subvert the will of the people and manipulate its hold on power in 2023.

“Our party, standing shoulder to shoulder with the Nigerian people, will use every means available and permissible under our laws to ensure that such provision that seeks to institutionalize and endorse rigging is not allowed to pass.

“The PDP, therefore, counsels the APC to read the handwriting on the wall and know that Nigerians are ready and waiting to resist them at any turn ahead of the 2023 election,” the party’s spokesman added.