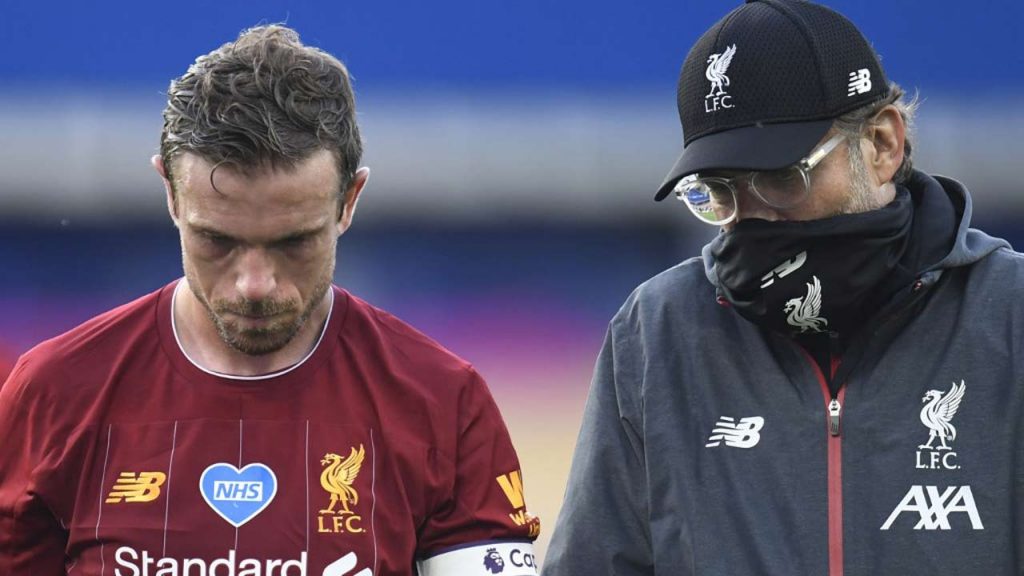 Liverpool will need favours from Manchester City to clinch a first Premier League title in 30 years this week after being held to a 0-0 draw by Everton in a Merseyside derby without the usual fervour behind closed doors on Sunday.

Everton came the closest to breaking the deadlock as Tom Davies struck the post and Alisson Becker saved from Dominic Calvert-Lewin to deny the Blues a first derby win in 10 years.

Liverpool remain well on course to win the league with a 23-point lead over Pep Guardiola’s men at the top of the table.

The Reds could clinch the historic feat on home soil against Crystal Palace on Wednesday should City drop points at home to Burnley on Monday.

However, if City beat the Clarets and Chelsea on Thursday, Liverpool’s next chance to will come when they travel to their closest challengers on July 2.

Liverpool began a Merseyside derby like no other in the unfamiliar surroundings of a Portakabin in the Goodison Park car park before making their entrance from the opposite end of the ground to their hosts as Everton’s tight tunnel leaves little room for social distancing.

In keeping with all matches since the Premier League’s restart, players and officials took a knee prior to kick-off, but Liverpool’s Sadio Mane was caught unaware as he made a brief dash down the wing before realising and joining his teammates to kneel.

Another consistent feature with the Premier League’s first full weekend of action since March was a slow start as both sides adjusted to the new surroundings of empty stands.

Liverpool boss Jurgen Klopp left Mohamed Salah on the bench for the full 90 minutes due to a minor injury problem.

Without the Egyptian and Andy Robertson’s positive runs from left-back Liverpool lacked their usual dynamism as they struggled to break the hosts down.

Roberto Firmino dragged the best chance of the opening 45 minutes wide, while Trent Alexander-Arnold’s long range free-kick was the only shot on target either side managed before the break.

The visitors upped the tempo and their intensity in the second half as Klopp introduced Alex Oxlade-Chamberlain, Georginio Wijnaldum and Divock Origi in the search for a winner.

But the longer the game went on, it was Everton who looked the more likely side to score on the counter-attack.

Richarlison fired a warning shot as he blazed over after getting in behind.

Calvert-Lewin’s improvised flick then forced Allison into a fine save and Davies’s follow-up effort came back off the post.

Calvert-Lewin then headed just wide from the resulting corner and Allison stood tall to deny Richarlison again as Everton scented a first derby in 22 attempts.

But they had to settle for a point as Liverpool failed to win in the Premier League for only the third time this season.