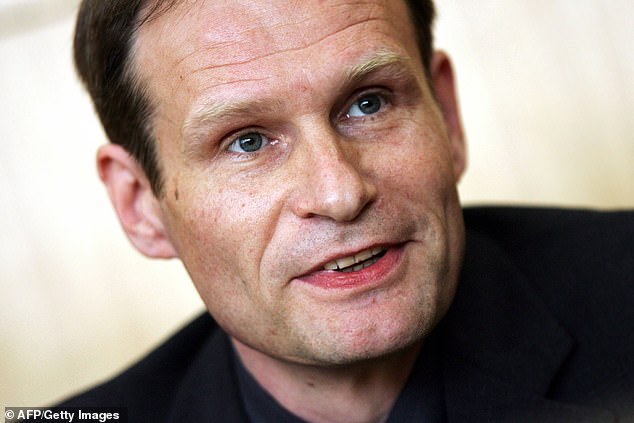 A cannibal who put out an advert for ‘a man to slaughter’ on a gay website before murdering and eating him has been going for ‘walks around town’.

Murderer Armin Meiwes, 58, was given ‘sunglasses and a cap’ to hide his identity and then driven to another state in Germany for walks.

According to an investigator as reported in the Daily Mail:

Two officers accompany him. We always drive it to another state for security reasons. There he can walk around town.

In March 2001 Meiwes stabbed Bernd Brandes, 43, in the heart after amputating his appendage and frying it in a pan with ‘salt, pepper garlic, and nutmeg’, the murderer revealed in a televised interview in 2007.

The pair met online after Meiwes put out an advertisement for someone who was willing to be killed and eaten.

Brandes met Meiwes, a former computer technician, at his Rotenburg farmhouse in the western state of Hesse. The timber-beamed mock Tudor house had belonged to his mother.

During the murder, in a pre-prepared killing room, Meiwes tried to eat part of Brandes, who had taken 20 sleeping pills to numb the pain.

When Brandes was dead he was chopped to pieces on a butcher’s block and kept in a freezer as Meiwes gradually ate meal-sized portions over a period of months.

After putting out an advertisement for a second victim he was finally caught by police when an Austrian student reported him in 2002.

Meiwes used a website called The Cannibal Cafe. His post stated that he was ‘looking for a well-built 18 to 30-year-old to be slaughtered and then consumed’.

Meiwes was convicted in 2006 for murder and disturbance of the peace and sentenced to life imprisonment, overturning a 2004 conviction for manslaughter and a lesser sentence of eight-and-a-half years.

At trial, Meiwes said he had always dreamt of having a younger brother ‘to be part of me’ and thought of cannibalism as a way to fulfill that obsession.

At his retrial, a psychologist stated that Meiwes could re-offend and still ‘had fantasies about devouring the flesh of young people’.

There had been a legal argument over whether killing a willing victim counted as murder.

Now Meiwes has been described as a ‘friendly, outgoing, polite’ prisoner who reads, helps other prisoners with the typewriter, goes to church services, and works in the laundry.