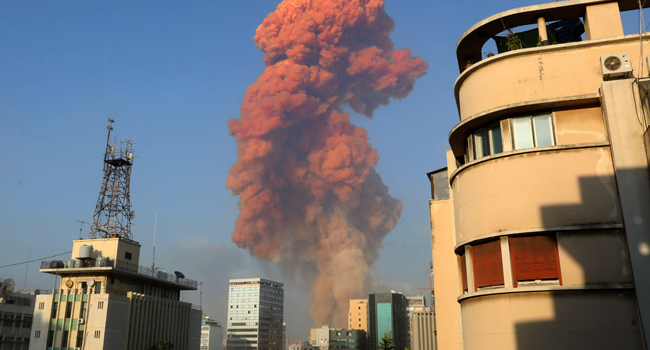 The Lebanese Supreme Defense Council has met over Tuesday’s massive blasts that occurred in the port of Beirut.

The council stated it might have been the consequence of maintenance work at the site.

President Donald Trump said United States Generals told him that the cause was a “bomb of some kind”.

But Lebanese security service explained that the explosion occurred as a door of the port’s hangar was being welded.

They said the repair was carried out because the door, which was the barrier of where explosive materials were stored, did not close properly.

Officials noted that this made it easy for people to both enter and leave the hangar.

“2,750 tonnes – the amount of ammonium exploded in the port of Beirut – are materials that were seized in 2014 from the Rhosus dry-cargo ship, registered in Moldova, when it was heading to Africa and suffered damages during navigation.

“A sparkled to the burning of explosive materials in the hangar that then led to a blast of 2,750 tonnes of ammonium nitrate, which is equivalent to 1,800 tonnes of TNT,” the council said, as quoted by LBCI.

Back in 2014, the Rhosus cargo ship – owned by Igor Grechushkin, a Russian national – was abandoned in Beirut.

It carried ammonium nitrate and was prohibited from being unloaded or transferred to another vessel by port authorities.

The government has announced that half of Beirut’s buildings were damaged, and hospitals overcrowded.

A Red Cross official put the casualty figure at 100; more than 3,000 are injured.