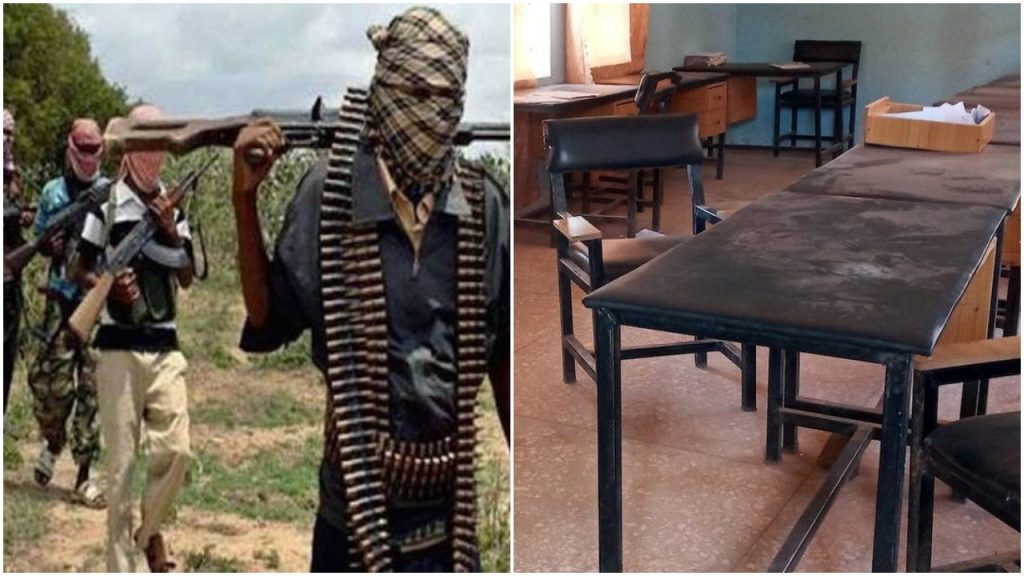 Fear has gripped many Nigerians over the constant attacks on schools by terrorists, kidnappers, bandits and other suspected criminal elements. To many Nigerians, the school environment has now become an abduction ground. Many parents, especially those whose children are in the boarding schools now live in fear over the safety of their wards.

Recall that the nation was greeted on Wednesday morning with the news of an attack on Government Science College, Kagara, Niger State. Reports also had it that the school was not just attacked but students and staff of the school were abducted by the gunmen who came dressed in military uniform.

The attack on the school and abduction of the students in Niger State, which has been under immense attacks lately by gunmen believed to be bandits, did not come to many Nigerians as a surprise, because it has become the stock-in-trade of insurgents and bandits operating in the Nort-East, North-West and part of the North-Central geopolitical zones.

In what has become a ‘war of education’, a core objective of the Boko Haram insurgency, whose alias translate to ‘Book is Evil’, insurgents and bandits have continued to intensify attacks on schools, killing and abducting students at will. But DAILY POST observes that the governments at all levels and the security agents have remained helpless and only waiting to negotiate the release of the abducted.

The President of the Senate, Ahmed Lawal succinctly analysed the effect of the war on Education when he said on Tuesday that parents, who had to be cajoled and encouraged to send their children to school in the North may just have found a genuine reason not to do so any longer.

Lawan said: “Let me be a bit clear about the incidents of abducting students from schools.

“Almost all the incidents of abducting students from schools happened in Northern Nigerian and we all know our leaders of yesterday, probably right from independence, have worked so hard to ensure that children go to school in Northern part of Nigeria.

“With incidents like these, we will be reversing all the gains that were made in convincing parents to take their children to school.

“So there is a need for our security agencies and government to ensure that we come up with strategies of ensuring security in schools.

“Because with these spate of kidnappings and abductions, definitely there will be that negative adverse effect on the desire and willingness of parents to allow their children to go to school.

“And the consequences of not going to school are better imagined in 21st Century Nigeria.”

But the insurgents and bandits operating in the Northern part of the country may have found attacks on schools as a potent tool, not just to further their agenda, but a way to attract attention and make good with the negotiations that follow. This has led to a plethora of attacks and abductions in the country.

DAILY POST presents a timeline of attacks and abductions on schools from 2013 to 2021.

The Boko Haram insurgents attacked Government Secondary School, Damaturu, the Yobe State capital in June 2013. During the attack, eight students and a teacher were killed while they were taking dinner.

What may pass as the most callous of the Boko Haram attacks in schools took place in Mamudo, Yobe State on the 6th of July, 2013.

The insurgents had attacked a boarding school in Mamudo housing about 1,200 students, killing 42 persons including teachers and students in the process. According to reports, the victims were gathered together while their attackers shot at them and threw explosives. They also poured petrol on the school building to burn it down.

It was the turn of the Yobe State College of Agriculture located in Gujba, as Boko Haram insurgents attacked the school on the 29th of September, 2013, killing 50 students who were dispersed to the great beyond in their sleep.

The provost of the college, Molima Idi Mato, while describing what happened, uttered these words: “They attacked our students while they were sleeping, they opened fire on them.”

Perhaps the most popular of the abductions of students by the dreaded insurgents was that of the students of Government Girls Secondary School, Chibok on the 14th of April, 2014, as it attracted global attention, leading to the famous Bring Back Our Girls Movement (BBOG).

In the attack on the school, 276 girls were whisked away by the insurgents leading to national and global outrage as reports claimed they were forced from their dormitories and driven in trucks to the bush.

The success of the Chibok operation must have emboldened the Boko Haram insurgents to again strike in Dapchi, Yobe State where they attacked Government Girls’ Science and Technical College (GGSTC), abducting 110 girls in the process. This was on February 19, 2018.

Coming barely four years after the Chibok episode, the abduction led to another uproar, but unlike the Chibok girls who stayed in captivity for years, 104 of the girls regained freedom on the 21st of March, 2018.

Reports had it that five of the girls died while one other, Leah Sharibu remained in captivity till date on account of her refusal to denounce her Christian faith and convert to Islam as instructed by her captors.

On the 11th of December, 2020 gunmen suspected to be bandits struck at the Government Science Secondary School, Kankara, in Kankara Local Government Area of Katsina State, abducting more than 300 students at once.

Experts said the Kankara abduction, obviously the largest single abduction so far in the country, more than anything, exposed the precarious security situation in Nigeria.

Katsina State, just like a few others in the North-West geopolitical zone of the country, has been the hotbed of bandits’ criminal activities including massive kidnappings, killings and destruction of property.

A few days later, 344 students of the school were released in a forest in Zamfara State by bandits after reported negotiations.

In the wee hours of Wednesday, February 16, 2021, gunmen once again struck, attacking a school and taking away students and staff at will.

This time, the Government Science College, Kagara, Niger State was the target, as the gunmen, believed to be bandits, stormed the school in military uniform and overpowered the security guards on duty.

Though there is no exact number of those abducted, official reports have put it at 27.

To underscore why the insurgents and attackers have become emboldened to keep attacking schools and abducting students, the Niger State Government on Wednesday said it would adopt the approach of the Katsina State Government in the release of the Kankara boys, which is negotiation.

A Vote of No Confidence

Pained that students and staff of the school under his constituency have been added to the victims of banditry in the country, the Senator representing Niger South, Senator Mohammed Birma Enagi, declared on Wednesday that the Federal Government is “incompetent” in dealing with the rising insecurity in the country.

Enagi said: “The enemies of God, bandits, terrorists, kidnappers are everywhere. Where are we heading to in this country? What else do we need as lawmakers that we are not doing?

“Can we rightly say that the government is incompetent? Because this issue has been discussed here over and over and there is no improvement. It is getting worse.

“I’m sure everybody here has stories to tell about the security challenges. What else are we supposed to do that we are not doing?

“Are we supposed to amend the laws in this country to give every citizen freedom to carry arms?

“Are we going to amend the Constitution to give more powers to the governors who are the security heads in their various states because our government at the centre is showing incompetence in handling insecurity – because it is not his son or his daughter that has been kidnapped. I expect everybody in government to think like that.

“Instead of creating economic opportunities that will engage the unemployed and generate employment, the government is giving palliatives.”

Also speaking on the seeming ‘war on education’, a security consultant, Tunde Sosina believes that the government got it wrong right from the beginning. According to him, you cannot negotiate yourself out of a problem with a criminal and expect him not to come calling again when he is broke or needs something.

“Criminals are like pests, they keep showing their faces when they know you are operating from a position of weakness. The Nigerian government has been operating from the position of weakness since it agreed to negotiate right from the beginning for the release of kidnapped students. For the insurgents and bandits, they now see kidnapping students as an effective way to hold the government by the balls and get whatever they wanted. They also see the issue as a potential political problem government will not want to fester.

“The only way out of this is for the government to stand its ground, call their bluff and take the war to the insurgents and bandits. If this is not done, Nigerians will continue to witness attacks on schools and abduction of students. For insurgents and bandits, that’s the most potent weapon in their arsenal”, Mr. Sosina said.

Efforts made to reach the spokespersons of the security agencies for their reactions to these developments did not yield results as calls to their phones rang out without response.