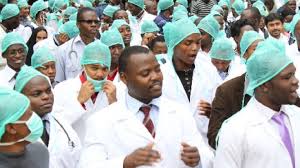 Doctors in Cross River State have embarked on an indefinite strike over COVID-19 concerns in the state.

The doctors, under the aegis of the Nigeria Medical Association, announced their decision to embark on an industrial action via a letter written to the Minister of Health, Osagie Ehanire on Sunday.

According to the State NMA Chairman, Dr. Agam Ayuk, the Nigeria Centre for Disease Control (NCDC) has not included Cross River in its daily update on COVID-19.

The Ayuk-led NMA accused the state government of neglecting “her responsibility of contact tracing, treatment, and care for the five confirmed cases which may not be unconnected with the delay in the publication of the results by NCDC.”

The letter partly read: “Arising from the meeting, all members of Nigerian Medical Association Cross River State branch in public and private hospitals have embarked on a total and indefinite withdrawal of medical services until NCDC and the State Ministry of Health give urgent and prompt attention to the issues raised.

“We trust that the relevant authorities will act decisively, within the shortest possible time to bring to a timely end our total and indefinite withdrawal of medical services.”

The association also accused the state Commissioner of Health, Dr. Betta Edu, over alleged unethical handling of COVID-19 testing in the state.

The doctors further “referred her to the NMA National Disciplinary Committee and Medical and Dental Council of Nigeria (MDCN) for the unethical handling of COVID-19 testing in the State, thus putting lives at risk and bringing the Association to disrepute.”

This comes a week after the Chief Medical Director of the University of Calabar Teaching Hospital (UCTH), Ikpeme Ikpeme, had announced that five patients tested positive for COVID-19 in the hospital.

But the state government accused him of spreading falsehood.

Governor Ben Ayadi has severally said that efforts made by his administration have prevented a COVID-19 outbreak in the state.