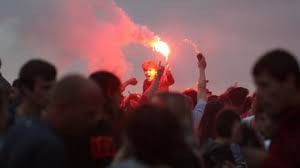 Thousands of fans descended on Pier Head to celebrate Liverpool clinching the club’s first league title in decades, but the night ended with a number of injuries.

Shocking footage also showed a man appear to aim a firework at the Liver Building, where “It’s natural that people want to celebrate but when it crosses into violence, vandalism and a threat to public health it’s hard to fathom.”

This morning Mayor Anderson posted on Twitter: “More in sorrow than anger, like most LFC fans & residents, I condemn those that brought a negative focus on LFC and our city.

“The pics, videos showing people’s behaviour is being talked about instead of the fantastic achievement of LFC. Thank you to those fans who have listened.”

The mayor also railed against suggestions he had failed to address concerns about the spread of coronavirus in relation to the recent Black Lives Matter demonstrations in the city.

He said: “I asked BLM organisers not to arrange demos, I also asked people not to go, I joined a virtual demo instead.

“I have asked people to leave the City tonight over safety. I have condemned people urinating in doorways and causing anti social behaviour. Get your facts right…

“Those demos were well managed and well behaved, there are images of people drunk, urinating in the streets, completely different.”

Last night Metro Mayor Steve Rotheram tweeted: “Nobody is more made up than me to see LFC champions again but this is dangerous.

“We’re not saying this to be party poopers but hundreds of people have already died in our region because of Coronavirus. Until it’s safe for us to come together to, please celebrate at home.”

It was reported that almost 20 ambulances were sent towards the waterfront to assist police.

Officers were handed powers to disperse the crowds via a Section 34 Dispersal Order, issued around Liverpool City Centre, under the Anti-social Behaviour, Crime and Policing Act 2014.