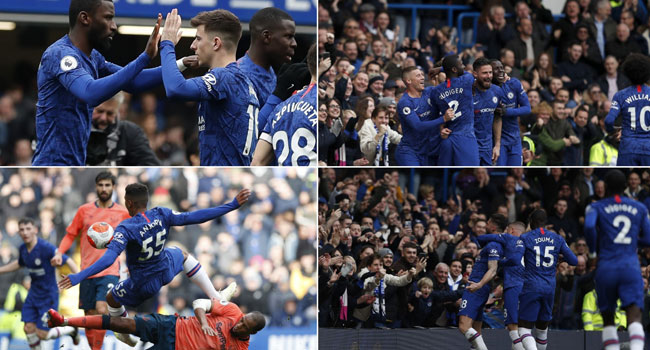 Frank Lampard warned Chelsea not to get complacent after they took control of the race to qualify for the Champions League with a 4-0 demolition of Everton on Sunday.

Lampard’s side won for just the second time in seven league games thanks to goals from Mason Mount, Pedro, Willian and Olivier Giroud in a masterful display at Stamford Bridge.

Fourth-placed Chelsea are in pole position to qualify for the Champions League with nine games to play.

But Lampard doesn’t want his stars to rest on their laurels just yet.

Aware that inconsistency has been the Achilles heel of his promising young team, Lampard said: “We can’t get ahead of ourselves. I’m experienced enough to know we go to Aston Villa next week, they are fighting for their lives and we have to replicate this performance.

“There’s still a long way to go. It’s still close. Even if it looks like a cushion as I sit here now, it doesn’t feel that way.

“It’s in our hands, but I’m certainly not going to jump in and say we are favourites. We have had inconsistency at times this season.”

While Lampard struck a cautious note about Chelsea’s Champions League ambitions, the Blues boss was quick to praise his players for delivering their biggest league win of the season.

It was exactly what Lampard demanded after Chelsea got back on track with their FA Cup fifth round win over Liverpool on Tuesday.

“At home yes, it was our best performance, because of the goals and the clean sheet,” Lampard said.

“In terms of performance we have been close to that a lot. We haven’t got the hard bit, the goals. Today we reached that.

“The finishing, the energy in the team, the speed of the pass, getting after the ball. We saw some really good stuff.

“It’s encouraging. You will always need your squad. We have a lot of injuries. The only way to tackle that is to work hard, play with energy and trust either other.

“I thought the whole attitude and focus of the team felt strong after Liverpool.”

Too often this term, Chelsea have dominated possession without killing off defensive opponents at Stamford Bridge.

But they tore into Everton from the start, with Mount and Pedro especially lively as they built on the platform provided by 18-year-old midfielder Billy Gilmour.

Gilmour was making his first Premier League start after a fine display against Liverpool and the Scot did everything Lampard asked of him.

“In the position where he plays, receiving the ball under pressure, he has to show balls. He’s done that, then when he played further up the field later in the game, he immediately took that on as well,” Lampard said.

Everton’s revival under Carlo Ancelotti has hit the buffers, with a run of three games without a win exposing them as frauds in the Champions League battle.

“Everything went wrong. We were too open defensively. We lost a lot of duels and with the ball we did a lot of mistakes,” Ancelotti said.

“It is not difficult to analyse this game. It is the first game when we did not compete. We have to learn from this.”

Defeats against Arsenal and Chelsea, along with a draw against Manchester United, have left Everton to focus on a Europa League berth instead.

“We never said we could qualify for the Champions League, but we can fight for the Europa League,” Ancelotti said.