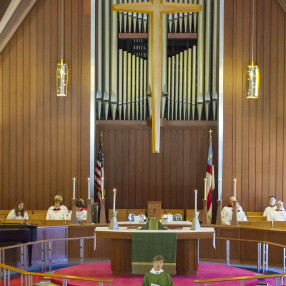 A Diocese of Chicago priest is the defendant in a civil suit filed by the family of one of her late parishioners, charging her with financial elder abuse.

In 2020, Hanna Schwitzy Lord, died leaving a $500,000 bequest to the Rev. Elizabeth Butler Jameson, former rector of St. Simon’s Episcopal Church in Arlington Heights. The executor of Mrs. Lord’s estate, Ed Schwitzy, claimed he had no knowledge of the bequest, and accused Mrs. Jameson of taking advantage of his aunt’s feeble condition to enrich herself. However, Mrs. Jameson states she had agreed to decline to accept the bequest before Mrs. Lord’s death, and that the family was seeking to enrich themselves at her expense.

On 19 August 2020, Mr. Schwitzky filed a Title IV complaint against Mrs. Jameson, claiming the priest had engaged in a “financially exploitative relationship with his aunt.” The diocese reported: “Ms. Lord, a member of the parish the Rev. Jameson had previously served as rector, was dying of cancer, and intended to leave a significant bequest to the Rev. Jameson, who had recently retired on disability due to a brain injury.”

Mrs. Lord died on 21 August 2020, prompting the Rt. Rev. Jeffrey Lee to issue a “pastoral directive  to the Mrs. Jameson affirming her decision to decline any inheritance that might be left to her, and directing her ‘to sign ‘Disclaim of Rights as Beneficiary’ forms for any pertinent accounts that name you as beneficiary’.”

With her retirement from the active ministry and the bishop’s pastoral directive in place to turn the bequest over the family,  “the diocese believed the case had been settled appropriately. The case was dismissed in late September 2020. Mr. Schwitzky did not exercise his right to appeal” the Title IV case.

However, communications between the family and Mrs. Jameson broke down, with each side accusing the other of acting in bad faith. Mr. Schwitzky filed a civil lawsuit seeking in excess of $1.4 million in compensation and damages, plus his attorneys’ fees. Mrs. Jameson had denied the charges levelled against her, saying she has always been willing to turn over the bequest to the family but is unwilling to enrich them by paying an additional $900,000.