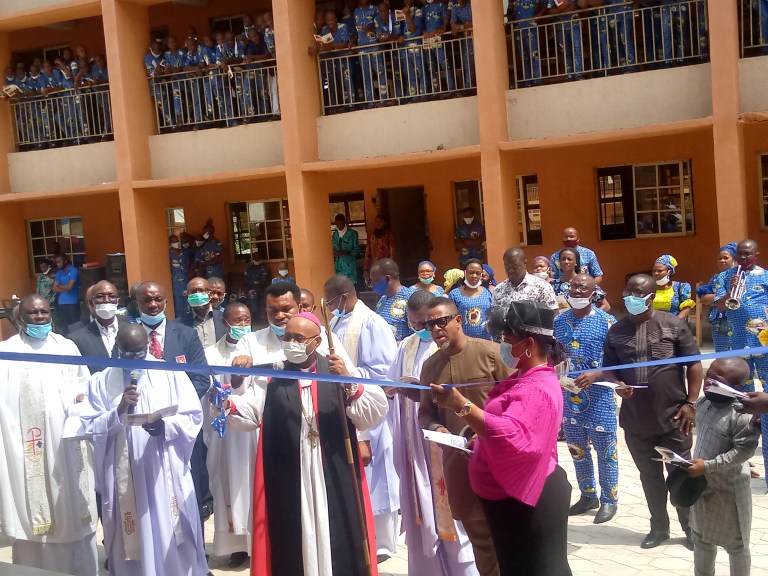 The Archbishop Ecclesiastical Province of the Niger and Bishop of Awka Diocese, His Grace, Most Revd. Alexander Chibuzo Ibezim has labeled the Old Boys Association of Bishop Crowther (Junior) Semnary, Awka as the best of it’s kind. 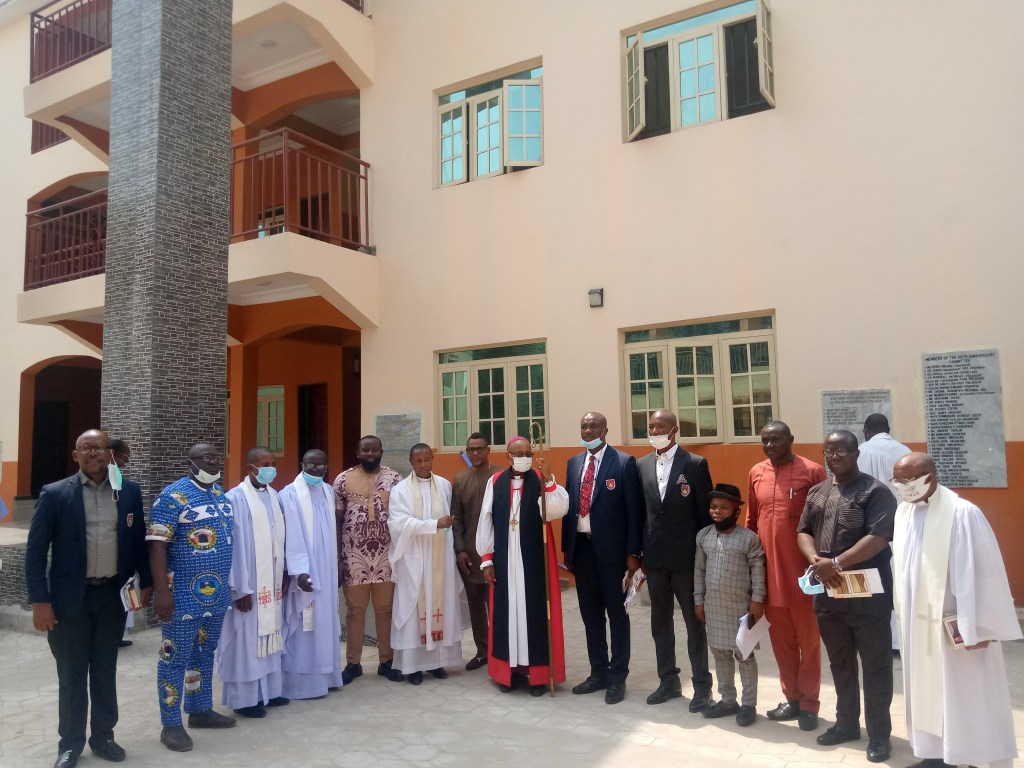 Ibezim made this revelation on Sunday in an event that marked the official dedication of a new administrative building built and donated to the seminary by the institution’s Old Boys Association. The event also marked the 40th anniversary of the seminary.

Commissioning the new administrative block, Archbishop Ibezim lauded the give back to society project of the old boys association. He praised the old boys for thinking it wise to invest in their alma mater which gave them all ingredients to be successful in life. He said that the building of the magnificent structure has again defined the institution as one of the best citadels of learning in the state and beyond.

Ibezim who is also the Bishop of Awka Diocese said that the old boys through their efforts made the seminary proud, urging them to extend their resources towards helping other schools including building of a resource center which he said could be named Bishop Crowther lodge and resource
center.Ibezim charged current students of the institution to learn from the giant performances of the old boys and advised them to leverage on the facilities which has been provided in the school. He urged them to remember the institution in due time like their predecessors had done. 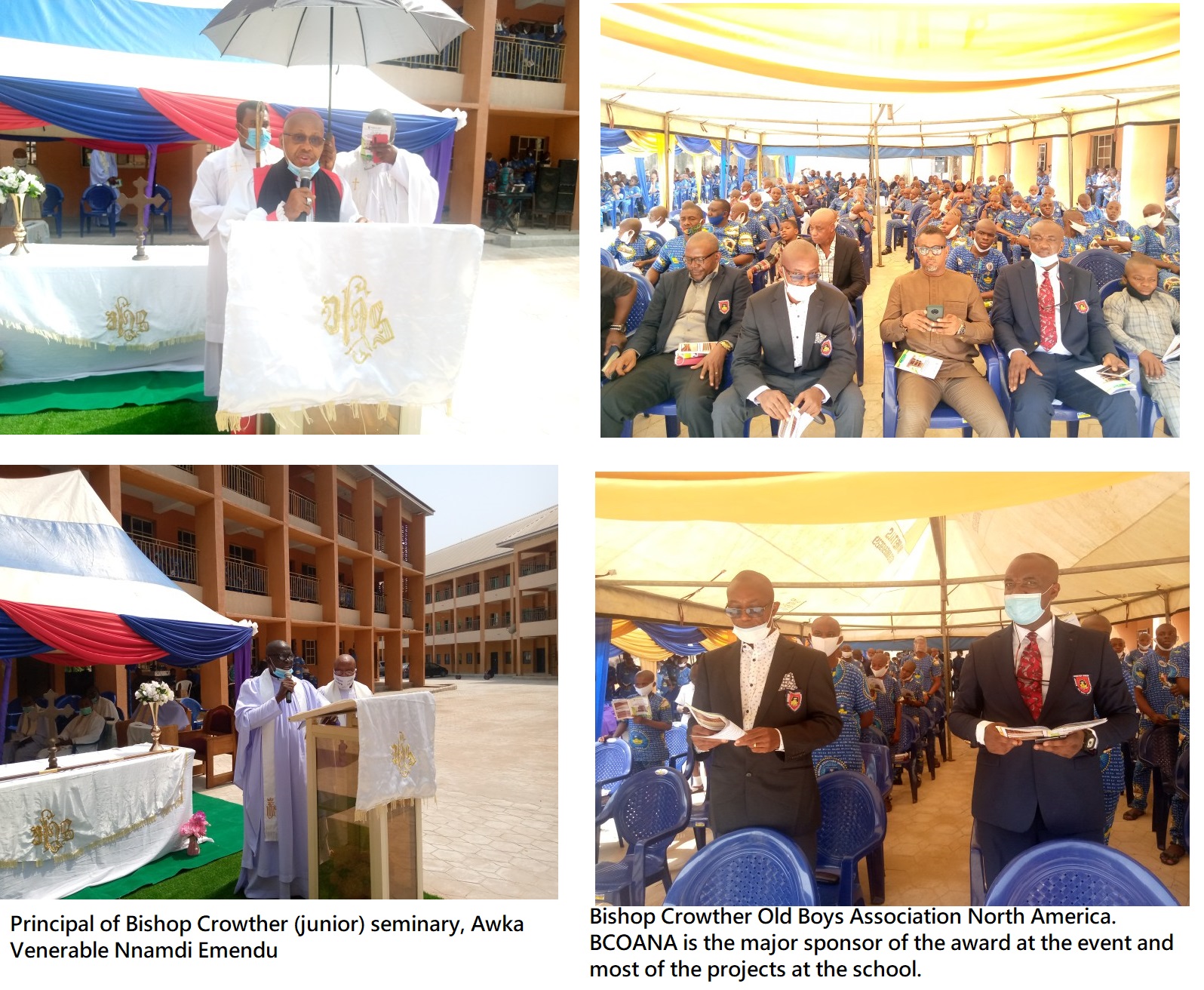 Reiterating the importance of conducive environment to learning, Ibezim noted that there is need for a cohesive environment especially in today’s troubled world. He blamed poor education environment and facilities as the reason for student’s participation in cultism and other criminal
activities.

Ibezim who during his sermon called on Christians to build their future on strong spiritual foundation for effective growth warned that Christians must shun any other foundation that is not foundation of Jesus Christ if they are to succeed in life.

Reading from the gospel book of Luke chapter 6: 46-49, Ibezim said there are principles that Christian must follow to avoid collapse in the journey of their life, noting that many people lost their greatness and riches because they failed to build on a solid foundation of Christ.

Meanwhile, the National President, Bishop Crowther (junior) Seminary Old Boys Association, Chijioke Nwankwo said that the new administrative structure donated to the Seminary was built to celebrate the institution’s 40 years anniversary noting that the Old Boys Association had contributed so much to the improvement of the facilities and structures in the institution.

Commending the association, Principal of Bishop Crowther (junior) seminary, Awka Venerable Nnamdi Emendu described the project as a great achievement which is rarely found in other schools.

Ven. Emendu who is also an Old Boy of the institution said that the Old boys had contributed a lot to the growth and development of the school. He reassured that everything installed in the institution will be fully utilized and adequately taken care of.

Re- echoing Ibezim’s demand, the chairman Bishop Crowther (Junior) seminary, Dr. Emma Emelumadu congratulated the old boys on their giant feat and hunger to make their impact known in the citadel of learning.

Dr. Emelumadu who was represented by the Awka Diocesan Synod secretary, Venerable Clement Mgbemena at the occasion however, charged the old boys to consider Ibezim’s demand, urging them to consider building of lodge and resource center which could be named after the school upon
completion.

At a recent valedictory service, the Archbishop Province of the Niger and Bishop diocese of Awka Anglican communion, His Grace Most Revd. Alexander Chibuzo Ibezim said Education is the bedrock for national development adding that he will ensure that the citizenry acquire quality education.

Bishop Crowther Old Boys Association North America. BCOANA is the major sponsor of the award at the event and most of the projects at the school.