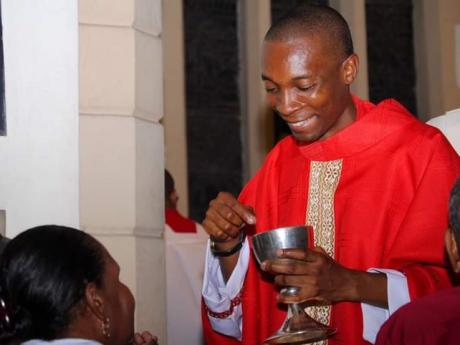 A Jamaican court has given life sentences to two men convicted of murdering the Rev. Larius Lewis (38), priest in charge of St Paul’s Anglican Church in Chapleton. Lloyd Thomngson (23) and Tafari Wilson (20) pled guilty to the 25 September 2020 slaying of Mr. Lewis on 12 April 2021. The court postponed sentencing pending examinations of the two men.

The killers stated they had met Mr. Lewis via the gay-dating site Grindr and had arranged to meet at the vicarage at St Paul’s Church. They testified that things went too far and Mr. Lewis was beaten to death after a quarrel erupted when he began to pay more attention to one of the men. Mr. Lewis was hit on the head with a table and rendered unconscious. The killers then bound his hands and feet with electrical cords and wrapped a plastic bag around his head. He died shortly thereafter.

As they left the vicarage the killers took a television, computer, cash, cellular phones, and other valuables and stole Mr. Lewis’ car, which was found the next day in Kingston.

Attorneys for the men asked the court for leniency, pointing to their having accepted responsibility for their crimes, and having had difficult childhoods. Thompson must serve 21 years before he is eligible for parole, and Wilson must serve 19 years before he can be considered for release.