New Anglican Bishops for England and Europe By Andrew Atherstone 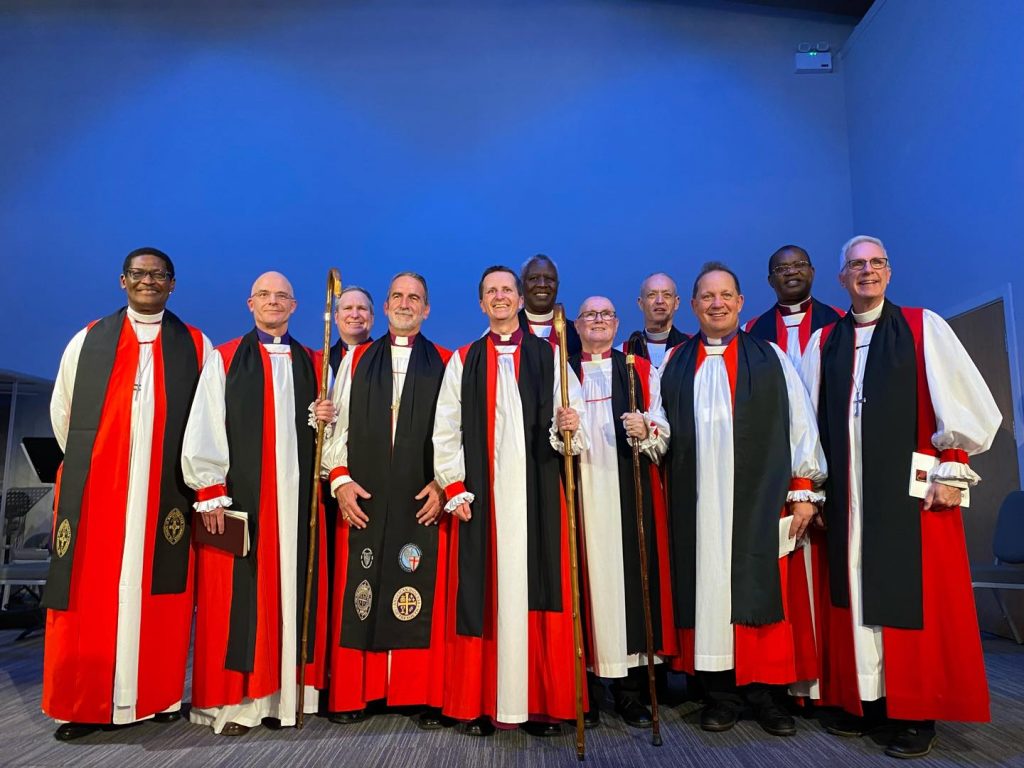 It was a great privilege to journey from Oxford to Yorkshire last Friday (21 October) to witness the consecration of two of our distinguished Wycliffe Hall alumni as new Anglican bishops. There was a buzz of excitement in the air at the inauguration of their new ministries, and exhilaration at the gospel bonds which draw together the global Anglican family. In a variation to the usual liturgy, the new bishops were doffed on the head with a Bible and exhorted, “Remember that you are always under the Word of God.” We weren’t gathered, however, in the Gothic glories of York Minster, but in a converted warehouse on an industrial estate in Hull, lent for the occasion by a local Vineyard church. This was not the Church of England, but a much younger ministry, the Anglican Network in Europe.

Global leaders in the Anglican Communion, associated with Gafcon, gave the consecration their full backing. Archbishop Laurent Mbanda (primate of Rwanda) preached the consecration sermon, on the Great Commission in Matthew 28, while Archbishop Henry Ndukuba (primate of Nigeria) presided at Holy Communion. They both declined invitations to the Lambeth Conference in summer 2022, but believed this event sufficiently important to make the long trek to Hull. There were also video greetings from Archbishop Stephen Kaziimba (primate of Uganda), Archbishop Jackson Ole Sapit (primate of Kenya), and Archbishop James Wong (primate of the Indian Ocean), among others. The chief consecrator was Archbishop Foley Beach of the Anglican Church in North America (ACNA), chair of the Gafcon primates’ council. Other bishops joining the consecration were Jay Behan (New Zealand), Julian Dobbs (USA), Charlie Masters (Canada), and Owen Nwokolo (Nigeria). These are impressive Anglican leaders, people of wisdom and stature. The platform was a wonderful global array.

Three years ago, when Archbishop Mbanda was advertised to speak at the annual Renew Conference, held in Leeds, he received a frosty rebuke from Lambeth Palace, informing him that according to English law all Anglican clergy must seek permission to minister in this country. The Archbishop of Canterbury added, with a handwritten flourish, “P.S. It is also a matter of actional law.” What action he was hinting at, if not legal action, is obscure. This letter was recently leaked to Virtue Online and is now in the public domain. It makes for mournful reading. How much better if the Archbishop of Canterbury had instead written, “I’m delighted to hear that you will soon be in England, and I’m praying that your visit will be a blessing to many. While you’re in the country, we would love to welcome you for supper, and to join us afterwards for prayer.” Lambeth Palace’s correspondence with Archbishops Mbanda and Ndukuba about the Hull consecrations is not yet published, but we must hope that when it sees the light of day it is characterized by gracious magnanimity, not scolding – on all sides.

The Gafcon movement brings together a multiplicity of Anglican theologies, from high church catholics to low church evangelicals. On this occasion, Archbishop Beach agreed to tone down the usual ritualistic frills, for the sake of evangelical sensibilities. There were no large pectoral crosses, or episcopal rings, and not a mitre in sight. The liturgy was taken not from ACNA’s 2019 prayer book but from Church Society’s 1994 English prayer book, though Beach did smuggle in one sacerdotal ritual during the Veni Creator Spiritus, by anointing the new bishops’ hands with oil – likely to give English evangelicals palpitations, and not in the published liturgy! Clergy in the congregation were asked to wear their dog collars, which was visually impressive, though it was strange to see Church of England evangelicals in collars that they would never normally wear on Sunday. Gafcon celebrations often embrace this incongruous mix of theological cultures from different sides of the globe, jostling together in kaleidoscopic union.

The Anglican Network in Europe (ANiE, pronounced ‘Annie’) was created in 2020 as a proto-province, and currently has two proto-dioceses, the Anglican Mission in England (AMiE, pronounced ‘Amy’) and the Anglican Convocation in Europe (ACE). It is an embryonic work, quickly growing, seeking to build a viable model for a full provincial structure. At the moment both dioceses are very small – AMiE has 23 congregations (all in England) and ACE has 11 congregations (3 in Scotland, 3 in Wales, 2 in Portugal, 2 in Germany, and 1 in England). Some of the new congregations are still so much in their infancy, newly born, that they don’t yet have websites. Most meet in village halls, primary schools, or community centres.

The bishop currently overseeing both dioceses is Andy Lines, former director of Crosslinks, a Church of England mission agency, consecrated by ACNA in 2017. Each diocese has now elected two suffragan bishops – Tim Davies (Sheffield) and Lee McMunn (Scarborough) for AMiE; alongside Stuart Bell (Wales) and Ian Ferguson (Scotland) for ACE. Bell was absent from Hull because of ministry commitments at the Garden Tomb in Jerusalem, so is due to be consecrated in Wales in spring 2023. Five bishops for just 34 congregations seems massive episcopal overload by Church of England standards, a top-heavy structure, but it is designed to enable a more personal, relational model of oversight than is feasible in bigger dioceses. It is also deliberately laying the groundwork for future growth. New congregations are joining every year and Bishop Lines has a steady stream of clerical enquirers seeking admittance.

The new province is like an experimental laboratory, where ecclesiological innovation is encouraged. These pioneers might make many mistakes along the way, a process of trial and error, but are attempting to create a functioning ecclesial operation from scratch. As one ACE clergyman puts it, “We’re building the aeroplane while we’re flying it”. The voyage of discovery can be thrilling and terrifying in equal measure. But from the cauldron of experimentation emerge new ecclesiological possibilities for 21st century Anglicanism.

Most strikingly, even though AMiE and ACE have ‘England’ and ‘Europe’ in their names, they are operating as overlapping, non-geographic, dioceses. They are breaking free from Anglicanism’s obsession with geography, which derives not from the New Testament but from the ancient rivalries of Anglo-Saxon kingdoms. As this new province grows, AMiE and ACE would rejoice to have church plants in the same town, in happy gospel partnership but under different diocesan bishops. They champion the principle of subsidiarity, devolving as many decisions as possible to local congregations. AMiE’s Articles of Association affirm: “The fundamental unit of mission and ministry is the local Church.” Congregations are self-financing, and are given maximum freedom to move from one diocese to another, or to leave the network altogether if they wish.

There is evident danger, however, of sowing the seeds of divisions into the soil of the new province even at its birth. The two dioceses have written their own sets of canons, reflecting their distinctive theological cultures. AMiE is explicitly conservative evangelical; its canons forbid Anglo-Catholic vesture, take a strict approach to remarriage after divorce, and set subscription to the Apostles’ Creed as the minimum bar of church membership. ACE’s canons are much looser, permitting broad theological variation, and encompass Anglo-Catholics and charismatics. ACE’s bishop-elect Stuart Bell has been a prominent leader in charismatic renewal in Wales for many decades. As rector of St Michael’s, Aberystwyth from 1988 to 2013, he grew it to be the largest Anglican congregation in the principality. Likewise, at Christ the King Anglican Church in the Algarve, southern Portugal, the ACE minister until recently was Mike Clarkson, another Wycliffe alumnus and well-known charismatic. He served his curacy in the HTB network at St Barnabas Kensington under John Irvine, and in 1993 planted Oak Tree Anglican Fellowship in Acton, west London, outside the parish system. ANiE is not the conservative Reform movement reborn outside the Church of England, but a remarkably broad community.

The clash of cultures between the two dioceses is seen especially in their contrasting approaches to the ordination of women. AMiE is a so-called ‘complementarian’ diocese – the ordination of women as deacons is currently being debated, but their ordination as presbyters and bishops is explicitly forbidden – the position the Church of England held before 1987. It offers a theological defence of this position, affirming the equality of men and women as “created image bearers of God”, and the ministry of men and women as “equally valid, valuable and necessary in God’s eyes”, and yet “only godly and gifted male candidates” will be admitted by AMiE to the presbyterate. ACE takes a different approach. It permits the ordination of women as deacons and presbyters, but not as bishops – the position the Church of England held between 1994 and 2014. Instead of defending this biblically, however, ACE simply offers a pro tem rationale – that their bishops must be male “out of respect for the diversity of views within global Anglicanism, and for the sake of unity”. This question is contentious within the wider Gafcon movement and some of the most conservative provinces have begun to consecrate women as bishops – Elizabeth Awut Ngor in South Sudan in 2016, and Emily Onyango and Rose Okeno in Kenya in 2021. There are pitfalls ahead for ANiE. Will a woman ordained presbyter by ACE be recognized by AMiE, for instance? Will they be able to plant churches together? Perhaps ANiE will soon be looking for help from the Church of England’s Five Guiding Principles.

Whether it is possible to maintain the unity of an Anglican province where each diocese has its own set of canons, time will tell. It is certainly an innovative approach. Canons are living documents, constantly evolving, but they create particular theological cultures, and those cultures can quickly grow apart. In some very obvious ways AMiE and ACE need to coordinate better and seek a common mind. For example, in AMiE the minimum age of ordination as deacon and presbyter is 23 and 24 respectively, but ACE has raised this to 24 and 25. Presumably this quirk will be ironed out soon. More seriously, the Declaration of Assent for ordinands is different in each diocese. Both assent to “the faith which is revealed in the Holy Scriptures and set forth in the catholic creeds”, but then they diverge. We were treated at the Hull consecrations to the oddity of the ACE bishop affirming “the Thirty-Nine Articles of Religion”, but the AMiE bishops affirming “the Articles of Religion agreed in 1562”. But there were only 38 Articles in 1562, of course, because Queen Elizabeth struck one of them out, and the full 39 were not promulgated until 1571. Why not simply agree one Declaration of Assent for the whole province, as a public sign of theological agreement and common cause between the dioceses? Otherwise, these fissures will deepen as movement grows, especially as further dioceses are created, all overlapping geographically and all with unique canons.