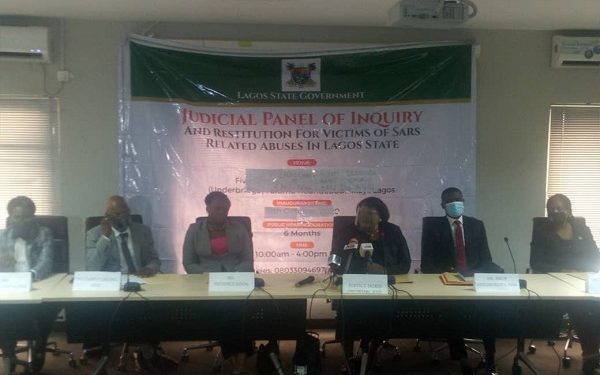 The Lagos State Judicial Panel of Restitution and Inquiry set up to investigate cases of police brutality, especially involving officers of the now-defunct Special Anti-Robbery Squad, has summoned the Inspector-General of Police, Mohammad Adamu.

The IGP was summoned over a case involving one Adewale Adewuyi, a petitioner whose 26 acres of farmland was allegedly seized by police since 2013.

Debo Adeleke, the petitioner’s lawyer, alleged that the police invaded the farmland located at Age-Mowo near Badagry on December 17, 2013, and destroyed it.

The development, the counsel said, affected the health status of his client.

Adeleke, who asked the panel to summon the IGP, said his client – brought on a stretcher – could not feed himself after the incident.

The lawyer also said a Federal High Court had in 2017 ordered the police to release the farmland and pay damages for physical assault.

But the police had refused to release the farmland or engage in alternative dispute resolution, the counsel added.

He said: “That order is needed, although I’m not supposed to say this is a fact-finding panel, we need to summon the IGP, so that he can tell the commissioner of police to release this land to us. They are not using the law, it is just there.

“Everybody fears the Lagos state judicial panel on restitution. We will be grateful if my lord will issue the order.”

But chairperson of the panel, Doris Okuwobi, ordered that the parties mentioned in the petition should be served summons and adjourned till March 30.