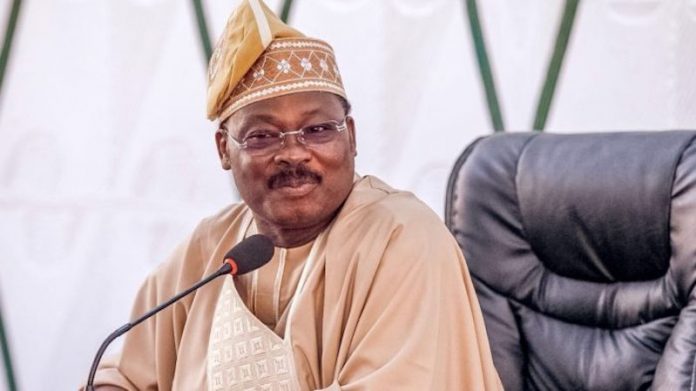 The Lagos State Government has confirmed that the death of the former Governor of Oyo State, Abiola Ajimobi on Thursday, was due to multiple organs’ failure.

However, sympathisers who gathered at the late Senator’s Oluyole Estate residence in Ibadan yesterday, in anticipation of his burial, were disappointed, as his body did not arrive in Ibadan. Nevertheless, a statement issued last night by his Special Adviser on Media, Bolaji Tunji, said Ajimobi would be buried at the mosque he built in Oke Ado area of Ibadan tomorrow.

Giving details of the ex-governor’s death yesterday, Lagos Commissioner for Health, Prof. Akin Abayomi, explained that the multiple organs’ failure was caused by complications from COVID-19 he earlier contracted.

Abayomi said the immediate past governor of Oyo State later tested negative for COVID-19 but that the illness had caused his health to deteriorate.

He was on life support machine before succumbing to death on Thursday at age 70.

The commissioner tweeted: “We regret the death of immediate past Governor of Oyo State, Senator Abiola Ajumobi who passed on today, June 25, 2020 at First Cardiologist Consultant; a private COVID-19 approved care facility in Lagos State.

The former governor was hospitalised at First Cardiologist and Cardiovascular Consultants Hospital, Lagos on June 2, 2020.

Loyalists of late Ajimobi, friends, and some family members arrived at his Oluyole Estate residence in Ibadan early yesterday morning in anticipation of his burial.
However, they were disappointed as his body did not arrive in Ibadan. It was later gathered that the burial arrangement had not been concluded.
A statement was later issued by the Ajimobi family, without addressing the precise burial date: “With great sadness and deep regret, but with total submission to the will of Almighty Allah, we announce the death of our husband, father, and grandfather, His Excellency, Senator Abiola Ajimobi, after a brief illness. Accordingly, funeral details will be announced in due course.”

To Be Buried Tomorrow

Another statement released last night revealed that the remains of Ajimobi would be buried tomorrow in Ibadan.

The statement by his Special Adviser on Media, Bolaji Tunji, said he would be buried at the mosque he built in Oke Ado area of the ancient city.

The statement read: “In close consultation with the governments of Lagos and Oyo states, the date for the burial ceremony has been announced. Barring any changes, his body will be interred at the Senator Ishaq Abiola Ajimobi Central Mosque at Oke Ado, Ibadan at 12 noon on Sunday the 28th of June 2020 after the traditional Muslim prayers.

“In light of the current circumstances of our national health challenges, the family appeals to the public to observe strict adherence to COVID-19 protocols in their participation. “Furthermore, details of the live media coverage of the funeral ceremony will be made public.

“In the near future, details of a larger funeral gathering will be announced where a lot more of his well-wwishers will have the opportunity to pay him their respect.”

Former President Goodluck Jonathan has expressed sadness over the death of Ajimobi, describing his passage as a great loss to the nation.

In a condolence message to the Ajimobi family and the government and people of Oyo State, Jonathan noted that the late Ajimobi was a public-spirited leader who inspired many to be sincere and forthright in service.

Jonathan said further: “He was a seasoned technocrat, a successful businessman and a skillful politician whose legacies will continue to endure.”

The former President also highlighted the innovative records of Ajimobi who became Oyo’s first two-time governor, adding that he was “a notable achiever who left a legacy of progress, peace and security in Oyo State.”

Jonathan further described Ajimobi as a determined leader and committed patriot, noting that “he indeed achieved his dream of leaving Oyo state better than he met it.”

The former President prayed for God to comfort Ajimobi’s family and well-wishers and to grant his soul eternal rest.

In his own message, President of the Senate, Ahmad Lawan condoled with the family, friends and political associates of the departed former governor and prayed for Allah to comfort them.

The Senate President said the deceased, who once represented Oyo South Senatorial District in the Senate before he was elected to two consecutive terms as governor, would be missed by the people of Oyo State and the progressives’ political family throughout Nigeria.

Lawan said Oyo State would always remember him for his numerous achievements over which the people rewarded him as the first governor to be re-elected in the history of the politically sophisticated state.

Lawan said his death would also be felt by the ruling All Progressives Congress, especially at a time the party is calling on all hands to be on deck to steady its sail.

Also, the Speaker of the House of Representatives, Femi Gbajabiamila described the demise of Ajimobi, as a painful loss.

In a statement by his Special Adviser on Media and Publicity, Lanre Lasisi, the Speaker said Ajimobi lived a fulfilled life and had served the people of Oyo State diligently and patriotically.

Gbajabiamila said he was personally touched and deeply saddened by Ajimobi’s death, saying Ajimobi was the architect of modern Oyo whose legacy would last long in the hearts of many Nigerians.

He said, “Ajimobi was a peace-loving man that promoted same among his people and beyond, Oyo State and Nigeria have lost a patriotic leader. My thoughts and prayers are with his family, the people and government of Oyo State and the country as a whole, especially the larger APC family.

“Late Ajimobi was a strong pillar in the APC fold. Not only that, he was a dedicated leader that left his footprints in the sand of time in Oyo State when he served as governor for eight years, making him the longest serving governor of the state to date. I pray that God Almighty will grant him a peaceful resting place and give his family the fortitude to bear the loss.”

The Progressive Governors Forum yesterday joined the government and people of Oyo State to mourn the death of the Deputy National Chairman of the All Progressive Congress, Senator Abiola Ajimobi.

In a statement signed by its Chairman, Abubakar Bagudu, on behalf of his colleagues, the PGF said it received the news of his demise with heavy heart and gratitude to God.

The PGF is the umbrella body of all governors elected on the platform of the APC.
Bagudu said, “We received the death of His Excellency, Sen. Abiola Ajimobi with heavy heart and gratitude to Allah (SWT) for a life well blessed.

“We, the Progressive Governors Forum, join the family, people and government of Oyo State and the nation to pray for the repose of the soul of our dear and beloved Sen. Abiola Ajimobi.

“His death is a loss to the nation and the Nigerian progressive community.
“We pray to God Almighty to grant the family the fortitude to bear this heavy loss. May Allah reward all the good work of Sen. Ajimobi, forgive his limitations and bless what he left behind.”

Jesus Trial: A Typical Miscariage of Justice Which is Evident in Our Society Today