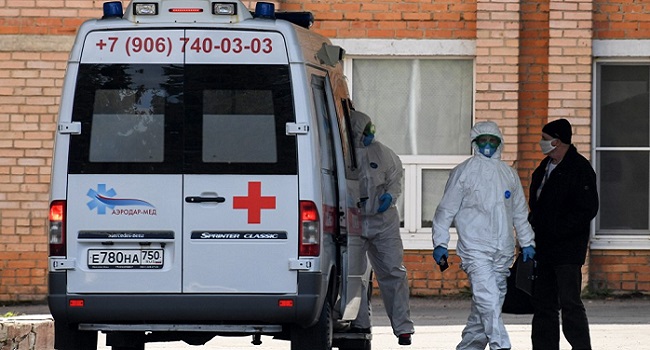 As the country’s COVID-19 cases continue to escalate, experts have found a delay in response to positive cases and decontamination of premises, as the main causes for the development.
This conclusion was drawn after several reports showed that many times, there was a delay between the time a patient develops symptoms, gets tested and the time-response is activated and decontamination of premises takes place.

A typical instance sited was the recent case of a company in Oyo State, where over 50 staff tested positive to COVID-19.

A statement by Oyo State government noted that the said company is a customer service provider for mobile network providers.

Findings indicated that the corporation, located at Old Kingsway Building, Dugbe, with more than 500 staff, shares the same building with other companies, hence the need to have commenced immediate decontamination.

Sources speaking on anonymity stated that on May 7 and 8, the company’s index case -a female staff who was coughing repeatedly, with complaints of malaria- had presented herself at the Infectious Disease Centre at Olodo, where she underwent a test that returned positive.

It was gathered that although officials of the Oyo State COVID-19 Task Force visited the office on May 11, they neither decontaminated nor shut down the office until May 17, which gave the virus enough time to spread
Our investigation revealed that similar cases abound, especially in Lagos, which is the epicentre of the disease.

Prof Tanimola Akande, an Epidemiologist and Public Health Speaker, said: “Delay in fumigating and decontamination of a place, where a COVID-19 positive case is found will result in more people getting infected. Also, delay in testing will mean a delay in detecting those that are positive, who should have been isolated. If they are not isolated, they are likely to infect other staff, as well as members of their households.

“Early response to suspected cases is vital in preventing or reducing the spread of COVID-19, which is highly infectious.

Adherence to preventive measures in Nigeria is sub-optimal. Individuals and organisations should adhere to the prescribed protocol to control this disease, which has taken a heavy toll on people’s health and economy.”

“I must confess that it was poorly managed,” he said. “There was no effort made to decontaminate early enough, not until after seven days. And when you remember that the incubation period of the virus is two to 10 days, this is long enough for the virus to multiply and spread. And so, for all you know, a good number of the work force would have been exposed and possibly contracted the virus.

“Viruses on their own are not capable of multiplying, they need a host for that. So, disinfecting surfaces and practising hand hygiene, besides avoiding touching the face, will greatly reduce the chance of people contracting the infection from surfaces that are not re-infected. It is now widely accepted that the environment can play a key role in the spread of infection in both healthcare environments and the community.”

As is the case with any virus or infection, environmental decontamination of facilities is vital for controlling the potential spread of Coronavirus. The best way to deal with the problem of COVID-19 staying active on surfaces is to clean those surfaces with a solution that is 62-71 percent ethanol, 0.5 percent hydrogen peroxide, or 0.1 percent sodium hypochlorite. Disinfection helps in reducing the viral load in the environment. A 1 percent hypochlorite solution is an effective disinfectant on various surfaces.

To him, what the Ibadan factory should have done was to carry out massive disinfection of the office environment, as a control measure.

“This is because it is possible that the affected worker might have been spitting in the open or sneezed severally without covering her mouth. Floors, walls and surfaces touched by hands should be disinfected as per guidelines. This is because handrails of staircases, elevators, door-handles, armrests of chairs and table surfaces can be contaminated by droplets,” he explained

Amibor said late presentation and reporting of cases is another factor contributing to the high spread of the disease.

“Everyday, we read of avoidable deaths of Nigerians from COVID-19 because they reported late to hospitals. Some of them have been known to conceal their travel history, especially at the early stages of the pandemic,” he said. “Almost all the cases were guilty of this delay. The elites, who should know better, as some of them came from America and Europe and saw real life cases of COVID-19, yet when they started experiencing the symptoms, some of them waited until the dying minute before seeking medical intervention. Even the not so enlightened are equally guilty of this delay in reporting, which has caused more harm than good in the control efforts of COVID-19 in this country. The number of cases is rising, due to increased laboratory testing and reporting across the country.”

To tackle the rising cases of community infection, Amibor said there was still a need to create more testing centres.

“You discover that to date, less than 10,000 Nigerians have been tested, but this is a far cry out of a population of about 200 million people. I am strong of the opinion that Nigeria will need to include other health workers, such as community pharmacists in the testing programme. This is the approach adopted in the US, and it has largely helped to increase the number of people tested.

“The resultant effect is that asymptomatic carriers in the population will be detected early enough, and treatment will be commenced on them early enough. Community pharmacies abound in every state of the federation. What the Nigerian Centre for Disease and Control (NCDC) can do is to partner these pharmacists, find out those that are interested in partnering with them, send them for training and then make the rapid diagnostic test kits available to them. This will have a two-fold effect, namely that more people will be tested and those found to be infected will be quickly isolated and treated before more damage is done.”

An Infectious Disease Expert, involved in COVID-19 response, Dr. Chuks Agbejegah, blamed the states for the slow responses. “If there is failure in decontamination, it is the responsibility of the states’ Emergency Operating Centre/Committee (EOC), not the fault of NCDC. The EOC from NCDC steps in only when the states EOC fails to carry out their duty,” he said.