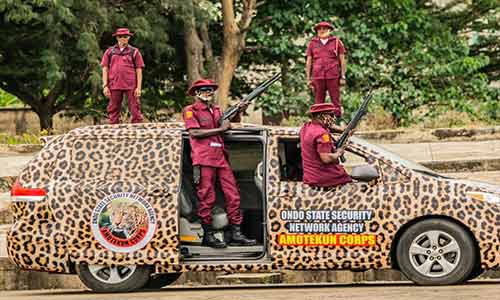 The Ondo State Chapter of the Western Nigeria Security Network, otherwise known as Amotekun Corps, says its operatives have intercepted three buses loaded with 18 suspected bandits and weapons heading all the way from the northern region of the country.

Spokesman for the security outfit, Adetunji Adeleye, noted that the corps got credible intelligence that three vehicles were coming into the state, loaded with weapons and possible miscreants.

Adeleye further disclosed that Amotekun operatives “laid siege on the road and eventually the three buses came in at about 2am on Thursday.

“We pursued the buses, two of them escaped and we eventually were able to apprehend one after tailing him for about 40km,” the corps’ spokesman narrated.

He added that the driver of the intercepted vehicle was able to cross four barriers before he was stopped in Ondo town where the road was solidly blocked.

“They (suspected bandits) came out and upon investigation, they claimed that the vehicle was loaded with people and weapons, stressing that they were mere drivers and conductors.

“The suspects claimed they didn’t know who actually loaded the weapons they were carrying,” Mr Adeleye further disclosed, adding that when the sacs in the vehicle were opened, the operatives discovered “over 500 different types of knives, swords, cutlasses, arms and charms”.

The Amotekun spokesman said the security outfit intends to charge the suspects to court immediately after interrogations have been concluded.