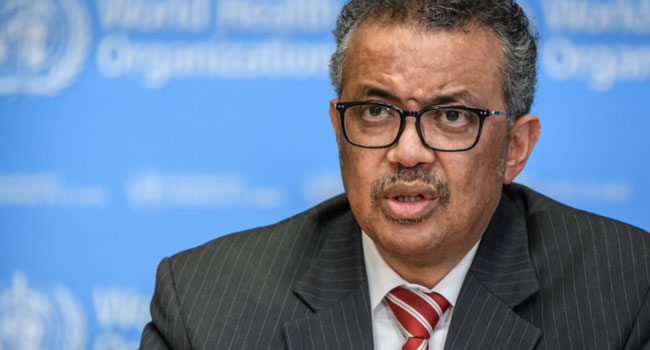 Six months into the coronavirus pandemic, over 10 million people have been infected and more than 500,000 have died, data from worldometers.info has revealed.

The World Health Organisation (WHO) head, Tedros Ghebreyesus, said the worst is yet to come, noting that the virus would infect many more people if governments did not start to implement the right policies.

“Six months ago, none of us could have imagined how our world – and our lives – would be thrown into turmoil by this new virus”, Mr Ghebreyesus told a virtual briefing on Monday, the BBC reported.

“We all want this to be over. We all want to get on with our lives. But the hard reality is this is not even close to being over,” he said. “Although many countries have made some progress, globally the pandemic is actually speeding up.”

The WHO chief noted that “we’re all in this for the long haul.”

“We will need even greater stores of resilience, patience, humility and generosity in the months ahead,” he said. “We have already lost so much — but we cannot lose hope.”

In an atmosphere of global political division and fractures on a national level, “the worst is yet to come. I’m sorry to say that,” he said.

“With this kind of environment and condition, we fear the worst.”

The latest grim milestone came on Tuesday, nearly four months after the WHO declared the coronavirus a pandemic on March 11, when there were 118,000 confirmed cases and 4,000 had died.

The first 41 cases were confirmed in Wuhan, China, on January 10. But the contagion has since spread to the world’s six continents and over 200 countries.

For most of its victims, the coronavirus causes mild or moderate symptoms, such as fever and cough that clear up in two to three weeks after a combination of treatment therapy, leading to the recovery of almost six million sufferers.

But the contagion is far more deadly for especially older adults and people with existing health problems. It can cause severe pneumonia that can make breathing almost impossible for the victim.

This has made ventilators, a piece of automated equipment that pumps air in and out of the lungs of patients unable to breathe on their own, very scare and high in demand.

As the virus continues to spread, life, as it was, is no longer the same with billions across the world trying to recover from the economic downturn of the lockdown measures. Hospitals are under strain as confirmed infections pile up.

There is no vaccine yet for coronavirus and the pathogen has been mutating in its pattern of spread. A study found that deadly disease can spread through the air and remains contagious for hours.

As of the time of filing this report, there are 10,590,953 confirmed cases across the globe, data from worldometers.info, an online dashboard that tracks the global number of confirmed coronavirus cases showed.

However, the four worst-hit countries – U.S., Brazil, Russia, and India – have a combined figure of over five million infections, more than half of the global total.

Meanwhile, about 5,798,970 people have recovered after treatment so far worldwide.

As of the time of reporting, about 514,021 people have succumbed to coronavirus, data from worldometers.info showed.

The United States which already has the highest number of reported infections in the world – 2,727,853 – is also the country with the highest death toll of more than 130, 000.

Europe, however, remains the worst-affected region with the combined death toll in Italy, Spain, France, Russia and the U.K exceeding 150,000, showing the high price nations can pay if the virus outstrips the capacity of a country’s health care system.

Some experts believe the death toll could be higher as many people suspected of the disease die without being tested.

Countries have continued to report inadequate testing kits for potential patients of the virus.

Coronavirus has slowly but steadily started gaining a foothold in Africa, a continent once perceived as one of the safest grounds as far as the disease is.

Over 10,000 people have died in the continent of over a billion.

These include the former Chief of Staff to Nigeria’s President Muhammadu Buhari; the former president of the Republic of the Congo, Jacques Joachim Yhombi-Opango; and Somalia’s former prime minister Nur Hassan Hussein.

Though the tally is still relatively low compared to global infection figures, it has doused the debate on the continent having some kind of immunity against coronavirus due to its sunny temperature.

According to data from Africa Centre for Disease Control, there are 383,747 confirmed cases across the continent as of Tuesday evening.

About 183,421 people have recovered after treatment.

There are no longer coronavirus-free countries in Africa as of May 13.

Governments are now rushing to reinforce measures to contain the spread of the disease, knowing that their fragile health systems will be swiftly overwhelmed if the disease spreads in large clusters.

On Tuesday evening, the Nigeria Centre for Disease Control (NCDC) announced 561 new cases of COVID-19, bringing the total number of confirmed cases in the country to 25,694.

The figures came a few days after authorities in the West African nation announced the lifting of a ban placed on interstate travels.

Meanwhile, health experts have continued to decry the country’s testing capacity especially after reports of ‘sudden loss of senses of test and smell’ attributed to COVID-19 went viral.

They say only massive testing can bed the confusion posed by the sudden scare.

The Nigerian government has identified deprived senses of taste and smell as a common symptom of COVID-19, urging anybody experiencing such to come forth for testing.

But the country still conducts only about 900 to 1,400 tests per day across its 26 molecular laboratories, a source confirmed to PREMIUM TIMES.