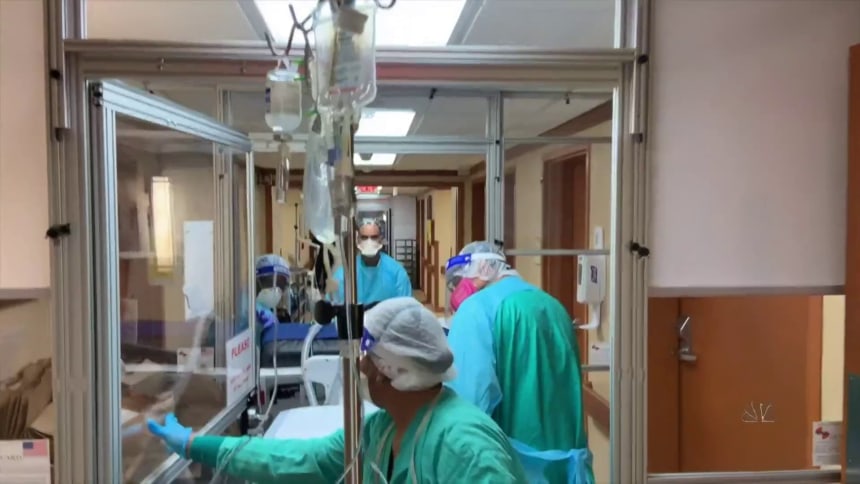 The United States reported 1.34 million Covid cases on Monday, according to an NBC News tally, with the daily case rate shattering global records as hospitalizations soared across the country.

At least 1,343,167 new Covid infections were identified on Monday, according to an NBC News’ tally, sweeping past the previous record of 1,044,970 cases that had been set on Jan. 3.

Daily case counts are typically high on Mondays due to many states not reporting over the weekend. However, the number still suggests a dramatic rise in cases in the U.S. as the highly transmissible omicron variant continues to spread.

It also represents the highest daily total recorded for any country in the world, according to Reuters, with the U.S. recording a total of 61,490,917 cases since the Covid-19 pandemic began as of Monday, according to NBC News’ data.

The seven-day average for cases in the U.S. also reached its highest point yet on Monday, hitting an average of 740,594 cases per day, with 24 states reporting their highest 7-day average of all time.

The record-high numbers came as Covid hospitalizations in the U.S. also soared, with the seven-day average for hospitalizations reaching 135,574 on Monday, up 83.1 percent in the last two weeks.

The surge in hospitalizations has been particularly noticeable in some Midwestern and mid-Atlantic states, according to an NBC News analysis of U.S. Department of Health and Human Services Covid hospitalizations data.

As of Monday, Washington, D.C.’s population-adjusted rate was the highest in the nation, followed by Ohio, New Jersey and New York’s.

As the highly contagious omicron variant continues to spread, hospitals have also reported a growing trend of seeing patients admitted for other ailments also testing positive for Covid-19.

Doctors told NBC News the trend could mean more people are having asymptomatic or undiagnosed cases than the current data shows.

In its weekly review on Covid published on Friday, the U.S. Centers for Disease Control and Prevention said cases across the country were continuing to “increase rapidly,” with the surge “driven by the omicron variant.”

The health body said that CDC projections suggested the omicron variant may now account for approximately 95 percent of Covid cases in the U.S.

“The entire country is now experiencing high levels of community transmission,” it said, noting that “hospitalizations are also on the rise.”

“While early data suggest omicron infections might be less severe than those of other variants, the increases in cases and hospitalizations are expected to stress the healthcare system in the coming weeks,” it warned.

Chantal Da Silva is a breaking news editor for NBC News Digital based in London.

Joe Murphy is a data editor at NBC News.