US Senate Prepares To Set Trump Trial In Motion 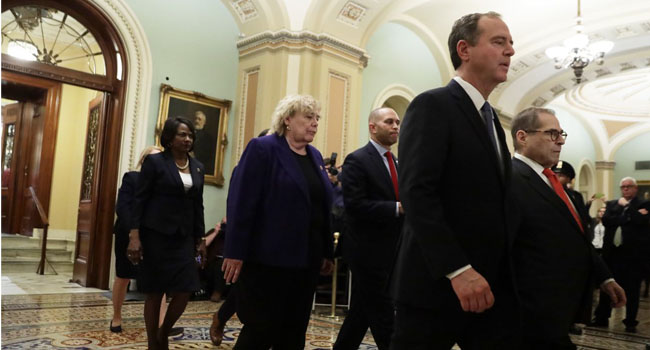 Articles of impeachment charging President Donald Trump with abuse of power and obstruction of Congress will be formally read to the Senate Thursday, setting in motion a historic trial that threatens the US leader with removal from office.

Supreme Court Chief Justice John Roberts will then be sworn in to preside over the trial and senators sworn in as jurors, as preparations get underway for an impeachment trial that will open on Tuesday, January 21.

Republican Senate leader Mitch McConnell said that the articles would be formally read to the chamber at noon (1700 GMT), in an announcement following their delivery to the Senate Wednesday.

“This is a difficult time for our country, but this is precisely the kind of time for which the framers created the Senate,” McConnell said, referring to the authors of the US Constitution.

“I’m confident that this body can rise above short-termism and factional fever and serve the long-term best interests of our nation. We can do this, and we must.”

The two articles of impeachment — one for abuse of power and the other for obstructing the House investigation — were delivered in blue folders in a solemn procession by the newly appointed House managers, seven Democrats who will prosecute the case against the president.

“So sad, so tragic for our country, that the actions taken by the president to undermine our national security, to violate his oath of office and to jeopardize the security of our elections, has taken us to this place,” Democratic House Speaker Nancy Pelosi said as she signed the articles.

“This president will be held accountable,” she said. “No one is above the law.”

The solemn formalities underscored the grimness of the occasion, Trump becoming only the third US president in history to be placed on trial in the Senate.

“We feel we are carrying out the will of the framers of our constitution, and that’s a pretty serious load,” said Adam Schiff, the Democratic lawmaker tapped to lead the prosecution team.

Trump is accused of secretly holding up $391 million in aid to Ukraine between July and September to pressure Kiev to investigate former vice president Joe Biden, the Democratic frontrunner in this year’s White House race.

The president is also charged with obstruction for holding back witnesses and documents from the House impeachment investigation in defiance of Congressional subpoenas.

He was formally impeached on December 18.

But Pelosi held back on delivering the articles to the Senate as she pressured McConnell to agree to subpoena the witnesses and documents that the White House blocked from the House probe.

McConnell has refused to commit, saying the issue will only be decided after the trial’s opening arguments and questioning, which could take two weeks.

A Trump administration official told reporters Wednesday that they expect the trial to last no longer than two weeks, suggesting McConnell could use his 53-47 Republican majority in the Senate to stifle calls for witnesses and quickly take the charges to a vote.

“I think it’s extraordinarily unlikely it will be going beyond two weeks,” the official said, on condition of anonymity.

With impeachment rules requiring a two-thirds super-majority to convict and remove a president, Trump’s acquittal is widely expected.

Earlier Wednesday Trump ridiculed the investigation and trial, as he has for months.

“Here we go again, another Con Job by the Do Nothing Democrats,” he wrote on Twitter.

They also showed the two, working with Ukrainian officials, trying to force out the US ambassador to the country, Marie Yovanovitch, eventually removed by Trump.

In a televised interview that aired Wednesday, Parnas told MSNBC that “President Trump knew exactly what was going on.”

“He was aware of all of my movements. I wouldn’t do anything without the consent of Rudy Giuliani or the president.”

Underscoring the high level of politics surrounding the trial, Pelosi was immediately attacked over the ceremony to sign the articles, in which she used multiple pens to distribute to key lawmakers as souvenirs of the occasion.

House Republican Liz Cheney attacked Pelosi and Democrats for being “giddy with excitement” about the signing and “making a mockery of their duty to the Constitution.”

Former federal prosecutor Elie Honig said the lawmakers chosen stood out for their backgrounds in the US legal system, several of them being former federal attorneys.

The Democrats “signal they intend to do this like a criminal trial and not like a political show,” Honig said.