Trump says he is taking hydroxychloroquine 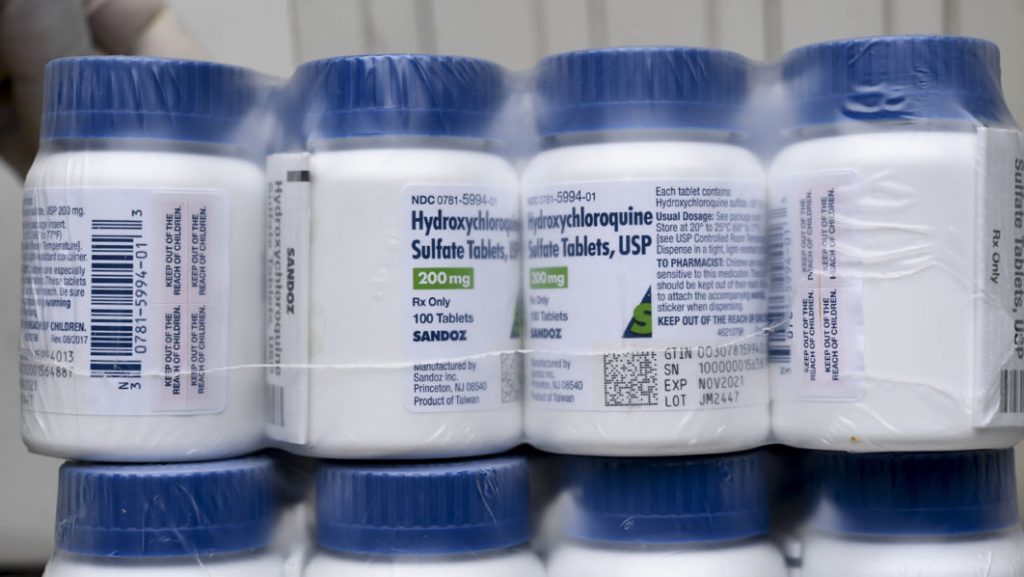 President Donald Trump on Monday made the surprise announcement that he is taking hydroxychloroquine, an anti-malaria drug that his own government experts say is not suitable for fighting the novel coronavirus.
Trump, noting that he has tested negative for the virus and shows no symptoms, said he’d been taking the drug as a preventative measure for about a week and a half.

“I take a pill every day,” he said, adding that he combines this with zinc.

Asked why, he said: “Because I think it’s good. I’ve heard a lot of good stories.”

Trump has shown interest for weeks in promoting the use of hydroxychloroquine, even if some doctors think it does not work for coronavirus patients and US government regulators warn it has “not been shown to be safe.”

House Speaker Nancy Pelosi said it’s “not a good idea” for Trump to be taking the drug as a potential treatment for the coronavirus.

“I would rather he not be taking something that has not been approved by the scientists, especially in his age group and in his, shall we say, weight group, which is morbidly obese, they say,” Pelosi said during an appearance on CNN’s “Anderson Cooper 360.”

“It gives people false hope, has people avoid real medical attention, and can actually cause them trouble. It is just dangerous what he did,” Schumer said on MSNBC.

Trump’s latest remarks came out of the blue, immediately grabbing headlines on a day when US deaths from COVID-19 topped 90,000 people — almost a third of the total world toll.

“I’m taking it, hydroxychloroquine, right now, yeah. A couple of weeks ago, I started taking it,” he said.

Trump has often played down the dangers of coronavirus, including last week when he said it threatened only a small number of people. He also pointedly refuses to wear a mask, despite federal recommendations to do so and the fact that most of his staff have taken to covering their faces in public.

A personal valet to Trump has tested positive for the coronavirus, as has Katie Miller, Vice President Mike Pence’s press secretary.

‘Reckless’
Trump said his use of the medicine was approved by the White House physician, Sean Conley. However, Trump insisted that he, not the doctor, took the first step.

Conley later issued a statement saying that he had agreed to Trump using the anti-viral drug “after numerous discussions” between them about the pros and cons.

“We concluded the potential benefit from treatment outweighed the relative risk,” Conley said.

Trump said he has received many “positive calls” from people, whom he did not identify, telling him about the malaria drug. He mentioned a letter he’d received from a New York doctor, also unidentified, who reported giving the medicine to hundreds of patients and “I haven’t lost one.”

By contrast, the government’s Food and Drug Administration warns against giving hydroxychloroquine for either prevention or treatment of the coronavirus, noting reported side effects including “serious heart rhythm problems in patients with COVID-19.” Only emergency use is authorized under temporary rules.

Earlier this month, a medical paper out of New York suggested that combining hydroxychloroquine with the dietary supplement zinc sulfate, which has antiviral properties, could create a more effective treatment against coronavirus.

But Matthew Heinz, an Arizona doctor who served under Barack Obama’s government, said medicines like hydroxychloroquine are not “benign” and open for unregulated use.

“I cannot stress enough how reckless it is to encourage anybody to take hydroxychloroquine or any other unproven remedy,” he said in a statement.

Trump signalled as he has throughout the crisis, that there was nothing to lose by trying possible treatments.

“It seems to have an impact, and maybe it does, maybe it doesn’t but if it doesn’t, you’re not going to get sick or die,” Trump said. “I take a pill every day. At some point, I’ll stop.”

The president said again on Monday that he showed “zero symptoms.”