The One Big Word In Christianity – Archbishop Emmanuel Egbunu 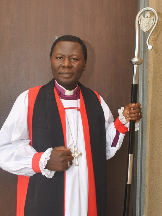 If you were asked what the most important word is for anyone who calls himself or herself a Christian, or someone who is considering becoming a Christian, what would your answer be?

Let us see what answers we find in the Bible:

THE EMPHASIS OF JOHN’S GOSPEL

“But to all who did receive him, who believed in his name, he gave the right to become children of God,” (John 1:12, ESV)

““For God so loved the world, that he gave his only Son, that whoever believes in him should not perish but have eternal life.” (John 3:16, ESV)

“Now Jesus did many other signs in the presence of the disciples, which are not written in this book; but these are written so that you may believe that Jesus is the Christ, the Son of God, and that by believing you may have life in his name.” (John 20:30–31, ESV)

““I do not ask for these only, but also for those who will believe in me through their word, that they may all be one, just as you, Father, are in me, and I in you, that they also may be in us, so that the world may believe that you have sent me.” (John 17:20–21, ESV)

THE EMPHASIS OF CHRIST’S TEACHING

Our passage for meditation, John 11:17-17, and indeed much of the entire chapter highlight the importance of believing in the Lord Jesus.  The chapter opens with the news that Lazarus was sick, and a message was sent to the Lord Jesus, possibly to make Him interrupt His preaching schedule and hurry down in this serious emergency. But the Lord remained where He was, and simply said, “This illness does not lead to death. It is for the glory of God, so that the Son of God may be glorified through it.”” (John 11:4, ESV). As it turned out, Lazarus died while Jesus was still away. When he told His disciples, He said, “So then he told them plainly, “Lazarus is dead, and for your sake I am glad I was not there, so that you may believe. But let us go to him.”” (John 11:14–15, TNIV). We immediately see two stated reasons why the Lord allowed it to happen:

From vv17-27 where our focus for today is, we see Jesus arriving in Bethany – apparently too late, after the worst had happened. Lazarus had died and had been buried. Four days had passed, when according to some opinions, the Jews believed the spirit of the dead person would have permanently left the body. At that point, nothing could be reversed. But we learn here that Jesus controls time, not time controlling Jesus. This is the lesson God kept teaching His people in the Bible. Abraham had to learn that his age and Sarah’s age could not prevent God from blessing them with a child. There are times when we feel God might not be able to do certain things anymore when the time has passed. Are you someone who believes that the time for God’s miracle has passed in your life? This account proves that God can never come too late for those who wait upon Him.

Martha’s first words when she saw Jesus were: ““Lord,” Martha said to Jesus, “if you had been here, my brother would not have died.” (John 11:21, TNIV). Mary repeated the same thing in v32 when she came out to meet the Lord. And in v37, some of the sympathisers who saw Jesus weeping, said, “But some of them said, “Could not he who opened the eyes of the blind man have kept this man from dying?”” (John 11:37, TNIV). All these statements imply that they felt the best miracle Christ could have performed was to prevent Lazarus from dying. Now however, it was too late to do anything. The point here is that it is NOT TOO LATE FOR THE LORD TO REVERSE ANY SITUATION, HOWEVER BAD IT IS. In this case, it was the death of Lazarus. If Jesus had gone within the first three days, they might have said He merely resuscitated him. At the time He went, the situation was completely hopeless. The question then is this: Can God glorify Himself even in a such very bad and hopeless situation?

Jesus proved that He could do more than prevent Lazarus from dying; He would bring him back to life. And that is what He did.

But we can miss the emphasis of the biblical account here: the emphasis is on believing. See how frequently it comes up in this story:

“Jesus said to her, “I am the resurrection and the life. Anyone who believes in me will live, even though they die; and whoever lives by believing in me will never die. Do you believe this?”” (John 11:25–26, TNIV). We must pause here to consider this sixth of the I AM sayings of Jesus. These were His statements of self-disclosure to His disciples in the Gospel of John. This particular one has been a great consolation to many at the time of dying or loss of a loved one. This serves as a solid foundation that encourages our faith in the Lord Jesus, beyond the situation of Lazarus who, though raised, died again (we have no further account about his death).

“I knew that you always hear me, but I said this for the benefit of the people standing here, that they may believe that you sent me.”” (John 11:42, TNIV)

THE EMPHASIS OF CHRISTIAN WORSHIP

The world BELIEVE is a big word in Christianity. Indeed most of the older denominations always recite the Creed which is a statement of belief: “We believe in God…in Jesus Christ…in the Holy Spirit…the Apostolic Church, forgiveness of sins, resurrection of the body, and life everlasting”

When we prepare people for Confirmation, there are three major areas that we emphasize:

Christian beginnings: how to be a Christian,

It is critical what we believe. Indeed, Christians are called believers while those who have no faith in Christ are called unbelievers.

WHY WE MUST BELIEVE

We may see many miracles in life – including people being healed and raised from the dead, but the greatest thing Heaven wants from us is to believe. Once Jesus was asked, “Then they asked him, “What must we do to do the works God requires?” Jesus answered, “The work of God is this: to believe in the one he has sent.”” (John 6:28–29, TNIV)

When Paul and Silas were imprisoned in Philippi and the earthquake took place, the frightened jailer asked the most important question any man can ask: “He then brought them out and asked, “Sirs, what must I do to be saved?” They replied, “Believe in the Lord Jesus, and you will be saved—you and your household.”” (Acts 16:30–31, TNIV)

Again, in his great epistle to the Romans he wrote, “if you confess with your mouth that Jesus is Lord and believe in your heart that God raised him from the dead, you will be saved.” (Romans 10:9, ESV)

The most popular Bible verse in the world centres on this: “For God so loved the world that he gave his one and only Son, that whoever believes in him shall not perish but have eternal life.” (John 3:16, TNIV).

Because Paul the former persecutor of the believers came to believe himself, that faith held him to his last days. Writing to his son in the faith to whom he handed the baton, he said, “That is why I am suffering as I am. Yet this is no cause for shame, because I know whom I have believed, and am convinced that he is able to guard what I have entrusted to him until that day.” (2 Timothy 1:12, TNIV)

Do you believe in Jesus? What it means is to accept that He went to the cross to die and pay for our sins. He has redeemed us, and we can put our trust in Him by confessing Him as our Saviour and Lord. You can do that right now where you are. Here is a suggested prayer:

LORD JESUS, I THANK YOU FOR DYING IN MY PLACE THAT I MIGHT BELONG TO YOU. I BELIEVE IN WHAT YOU HAVE DONE FOR ME. AS YOU RAISED LAZARUS FROM THE GRAVE, RAISE ME FROM THE GRAVE OF SIN, AND GIVE ME YOUR NEW LIFE. THANK YOU FOR YOUR PROMISE THAT YOU WILL NEVER TURN AWAY ANYONE WHO COMES TO YOU. I COME TO YOU NOW JUST AS I AM. MAKE ME A CHILD OF GOD, FORGIVEN AND ADOPTED INTO ACCEPTED INTO GOD’S FAMILY.