The Senate, on Wednesday, considered a bill to establish the National Religious Harmony Commission to promote religious tolerance in the country. 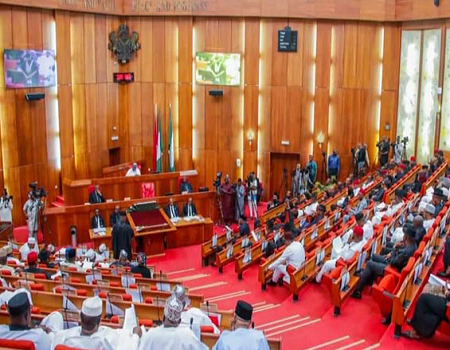 Expanding on the general principles of the bill, Umar said the establishment of the Commission would serve as an intervention to promote religious tolerance, peace, and harmony in Nigeria.

According to Umar, the United Nations Charter and several provisions of the 1999 Constitution (as amended) are based on the principles of the dignity and equality of all human beings.

He explained that the UN charter seeks the promotion and respect for human rights and fundamental freedoms for all without distinction to race, sex, language, or religion.

The Senator said, “Having realized the sensitive role religion plays in national security, peace, and harmony, the Federal Government wishes to promote inter-religious harmony and understanding due to the chequered history of religious intolerance in the Nigerian polity.”

He added that the NRHC establishment bill seeks to create an enabling environment for the peaceful coexistence of different religious beliefs within Nigeria and provide a forum for public enlightenment and dialogue.

Umar stated that establishing the Commission would limit controversy and confrontation over allegations of discrimination based on religious beliefs which would check the insidious effects of religious bigotry, profiling, stereotyping, violence, discrimination, extremism and hate speech.

Stating some of its responsibilities, the Senator said the Commission would protect the rights to religious freedom, render assistance to victims of religious discrimination or violations, investigate cases of religious extremism and hate speech, and detect and curtail early warning signals of acts capable of triggering religious tension in the country.

After consideration, the bill was referred by the Senate President, Ahmad Lawan, to the Committee on Establishment and Public Service Matters for legislative input.

The Senate charged the committee to turn in its report in four weeks.