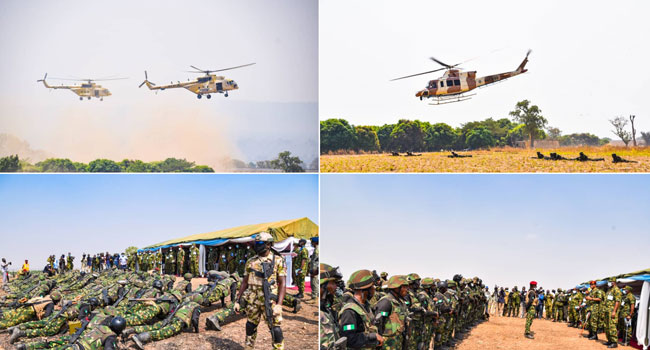 The training which held on Saturday is aimed at deepening the competence of operatives during combat operations.

The training exercise code-named “Taimako Yazo” was conducted on the Kaduna-Abuja expressway.

In his address, the Chief of Air Staff (CAS), Air Marshal Sadiq Abubakar, said personnel readiness was key to the success of any military operations in the country especially at this time in the nation’s history.

Abubakar recalled that in 2019 the NAF had conducted several counter-terrorism exercises in Kaduna, Kano, Niger, and Osun.

He said this was in a bid to further develop the capacity of its Special Operations Force, to be better positioned to respond to the various security challenges bedeviling the country.

“The overall desire is to ensure that our personnel are trained and equipped to maintain a very high level of combat readiness and operational effectiveness.

“This aspiration no doubt is in tandem with our yearning to reposition the NAF into a highly professional and disciplined force through capacity building initiatives for effective, efficient, and timely employment of airpower, in response to Nigeria’s national security imperatives.

“Accordingly, today’s exercise which is based on a Combat Search and Rescue situation is designed to exercise the capacity of our personnel to rescue downed aircrew who have had to eject or abandon their aircraft in emergency situations.

“The importance of training to a fighting force like the NAF cannot be overemphasised as regular purposeful training remains the cornerstone of military combat readiness,” he added.

According to Abubakar, this will ensure that NAF personnel are always at top physical fitness level to be able, willing, and ready to execute any mission successfully.

“It is in realisation of this that the NAF ensures that its personnel are mentally alert and physically fit at all times through regular training and exercises to ensure that we remain continually willing, able, and ready to defend the nation,” he said.

The Air Chief stated that even with today’s modern weapon systems, it is the personnel with competence that would make the difference in any current or future conflict situations.

“This philosophy has been incorporated into the NAF policies and regulations to ensure that personnel maintains a high level of combat readiness that would ensure efficiency and effectiveness in the conduct of a wide spectrum of military operations.

“Accordingly, in the quest to achieve professionalism, service members are subjected to excruciatingly difficult training procedures and exposures to various terrain conditions to enable them to achieve and maintain a high level of combat effectiveness.

“This, no doubt, will help our personnel perform at the highest standards, throughout their career.

“By organising this exercise we are also mindful of the need to sustain professionalism among our personnel,” he said.

Abubakar lauded President Muhammadu Buhari for his unflinching support for the growth and development of the NAF.

He reassured Nigerians that the NAF remained fully committed to the successful execution of its constitutional roles and would continue to meet its statutory responsibility of defending the territorial integrity and sovereignty of the nation.

Earlier, the Air Officer Commanding (AOC), NAF Special Operations Command, AVM Charles Ohwo, said that the objective of the exercise was to rehearse the tactics and doctrine.

He added that it was also to create a synergy amongst first responders for effective combat search and rescue operations of downed aircrew or other NAF personnel.

The AOC said that the ability to rescue crew in hostile environment was particularly important, as it could be adapted in anti-kidnapping operations.

This, according to him, was recently used by the NAF in concert with other security agencies in the rescue of the 344 boys of the Government Science Secondary School, Kankara, Katsina State.

He said the exercise was a deliberate effort to boost human capacity, through robust and result oriented training for enhanced professional performance.

“The cliché of sweating more in training to bleed less in battle underscores the essence of this exercise.

“Even more pertinent is that this event is in consonance with the CAS vision to reposition the NAF into a highly professional and disciplined force through capacity building initiatives for effective, efficient, and timely employment of airpower, in response to Nigeria’s national security imperatives.

“The timing for this event could, therefore, not have been more apt as the NAF is currently engaged in counter-insurgency and anti-banditry operations in the North-East and North-West of Nigeria respectively.

“Notwithstanding tactics and doctrine, the event will enable our personnel to imbibe regimentation and fully appreciate the need for effective Air-Ground Integration,” he said.