Over 12 Cows Killed By Thunder In Delta Community 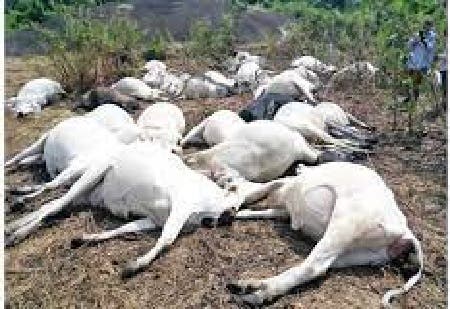 Over 12 cows have been reportedly struck dead by thunder at Urhodo-Ovu community of Ethiope East Local Government Area of Delta State.

Reports gathered that the thunder struck following a light rain thereby killing over 12 cows grazing on farmland while the herders took cover away from the scene out of fear. The time the incident occurred is unknown.

It was gathered that shortly after the cows dropped dead, their stomachs got swollen.

The residence of the area said the herders had been in the habit of destroying farmlands in the area and the affected farmers had severally complained to the herders but it fell on deaf ears.

The incident was said to have drawn sympathisers from nearby villages who were said to be shocked over the incident as well as glad that the herders had been paid back in full.

An incident that was similar was said to have also occurred in other towns and communities in the area which was not reported.

DSP Bright Edafe, who is the acting Police Public Relations Officer (PPRO), Delta Command, had nothing to say on the incident when asked on Thursday morning.