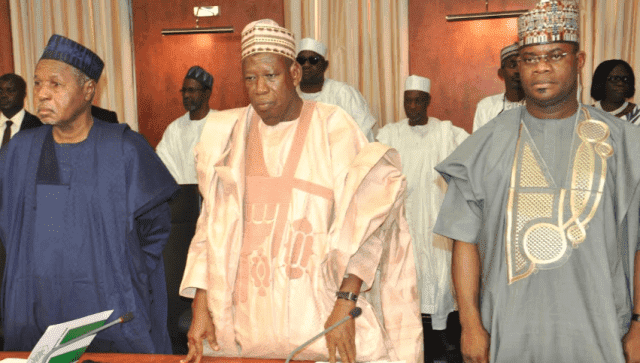 Governors of the 19 northern states have met with security heads, led by the National Security Adviser (NSA), Maj. Gen. Babagana Monguno (Rtd), to deliberate on the escalation of security security failure in the region.

It would be recalled that President Muhammadu Buhari had last week ordered the security heads, including the service chiefs, to meet with the governors to devise strategies to bring the situation under control.

One of the governors at the meeting, Governor Bello Matawalle of Zamfara State, who mentioned the meeting to State House Correspondents in Abuja, also said his administration had already commenced its mode of combating the menace of banditry.

According to him, Zamfara had already adopted the ‘carrot and stick’ approach in combating the bandits, explaining that only criminals who had refused to accept to change and accept to turn a new leaf that would face the wrath of goverment.

He said he was at the State House on the invitation of the Chief of Staff to the President, Professor Ibrahim Gambari, over the same security issue.

“I am here to see the Chief of Staff because of the issue of security that is bedeveling Zamfara State.

“We have discussed extensively about the issue of insecurity in the Northern Nigeria not just Zamfara State.

“Today, we met in the National Security Adviser’s office with Northern Governors and the Inspector General of Police and other security agencies.

“We discussed seriously on the issue of insecurity and the Chief of Staff invited me today to come and brief him about insecurity in my state which I did.

“We have discussed about it and understand where we are going. Zamfara State government and the security are doing their best to ensure we contain insecurity.

“We have to adopt so many ways to tackle the insecurity. We use stick and carrot and it is going concurrently. There are some repentant bandits that have already subscribed to the peace initiative, we are using them and some that have refused to dialogue, we are fighting them, so we are using both”, he said.

Answering questions on the success of security operations against the bandits in the state, he said that the security agencies were doing everything possible to bring normalcy to the place.

“It is very successful. Security agencies are doing very well and they have been working for about one month and we have seen the results, they have recorded a lot of successes in their operations and you know these operations are ongoing and they have more support for all what they need from the state and we assure Nigerians that within some few days they will make tremendous achievements”, he said.