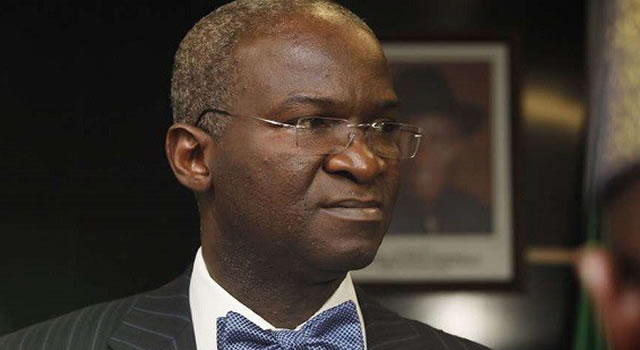 Nigerian Government on Thursday announced a new date for the completion of the Lagos-Ibadan expressway and Second Niger Bridge.

The Minister of Works, Babatunde Fashola, who revealed the new date

when he appeared on Channels Television’s Politics Today, said the projects would now be completed in the first quarter of 2022.

The projects were initially fixed to be completed in 2021, but Fashola said the initial date was no longer possible, blaming the delay on the coronavirus pandemic, which he said, slowed construction activities and affected government revenues.

The two projects are part of the projects funded under the Presidential Infrastructure Development Fund.

Another project under the fund is the Abuja-Kaduna-Kano highway.

He said, “As I speak to you now, we have lost essentially the prime of our working period which is the dry season in the COVID period. We have to regain and recover all of that.

“We have also lost some of our expected revenue plans. At the time COVID hit Nigeria, we were doing a 2.59 per cent growth rate. Now we are heading for a recession globally and Nigeria will not be insulated from that.

“We are working on plans to bring the economy back on track.”

The minister noted that works on the projects were suspended during the coronavirus lockdown.

He said in the first week of easing of the lockdown that 11 contractors, executing 53 projects in 26 states were “remobilised back to the site.

“We had to work with the governors to allow men and materials to move. We also had to develop new safety guidelines for the construction.”

On what President Muhammadu Buhari has done in the last five years to improve road infrastructure in the country, Fashola said:

“Given the circumstances and the results, we have done a lot much more with fewer resources.”

He cited refunds – near N700 billion – made by the Buhari’s administration to states for federal road projects worked on since 1999.

Fashola said, “These are debts that the previous government handed over at the time oil was selling at over $100 per barrel.

“Those roads were neglected then. These governments have inherited them at the time when revenues have dropped significantly, sometimes to as low as $20 per barrel.

“With much fewer resources, we have committed to more radical infrastructure development across Nigeria. So as I speak to you now, we are executing 600 road projects across all the states.

“We are in universities repairing internal roads that have been left behind.

“The Abuja-Kaduna highway is under construction, so is the Bodo-Bonny bridge. Second Niger-Bridge and the Lagos-Ibadan expressway.

“What is the impact? Although we haven’t finished, any road user today will tell you that their journey times on the major highways have been improved, compared to when we resumed.”