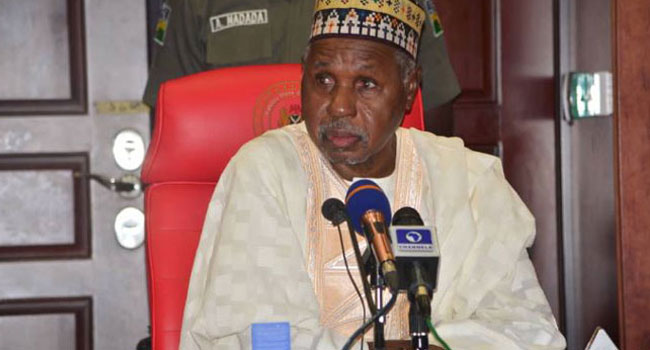 Katsina State Governor, Hon. Aminu Masari, yesterday said the state was under siege by bandits and kidnappers despite the peace accord he signed with them.

The governor explained that in the last two weeks, the bandits had killed over 50 persons and rustled unspecified number of animals in some communities bordering the deadly Rugu forest.

Masari, who was speaking when he received the Chief of Defence Training and Operations, Defence Headquarters, Maj. Gen. Leo Irabor, who paid him a courtesy call in Katsina, said heinous activities orchestrated by the bandits were becoming worrisome.

He said the bandits on Tuesday invaded a village in Sabuwa Local Government Area and killed five people and rustled all their animals, leaving many others with varying degree of injuries.

The governor stated that the bandits also kidnapped the Administrative Head of Danmusa Local Government Area, who is an indigene of Sabuwa, and his son.

He added that because of the resurgence of banditry and kidnapping in the state, citizens doubted the ability of the government to protect them and were threatening to resort to self-defence.

The governor, who admitted that the state was in a serious and desperate condition considering the resurfacing of banditry and kidnapping, said food shortage might engulf the state following the inability of farmers to access their farmlands.

He stated that the bandits were converging on Zamfara, Kaduna and Katsina states before launching onslaughts on communities within the states, adding that the recalcitrant among them are overpowering those who accepted the peace accord.

He said: “I am in a very confusing situation considering the terrible condition some of our people living in the villages bordering the forest are going through.

“Yesterday (Tuesday), the DPO of Faskari Local Government Area was nearly killed. Presently, he is at the orthopedic hospital suffering from two gunshots and we hope he will survive the injuries.

“Two weeks ago, we lost over 50 people. The bandits now carry out operations on a daily basis. People are losing confidence in us and are threatening to take arms. Yesterday (Tuesday) around 3.00 a.m., I have to plead with the political leadership of Faskari because they have mobilised to fight back.

“We are in a very serious and desperate condition. As the raining season approached, even those who can access their farms cannot because of the activities of bandits who have now taken over major parts of the state.”
Responding, Irabor said the military and other security agencies would continue to work assiduously with the state government to end bloodletting in the state and the North-west.