Maryam Sanda Appeals Judgement Which Sentenced Her To Death 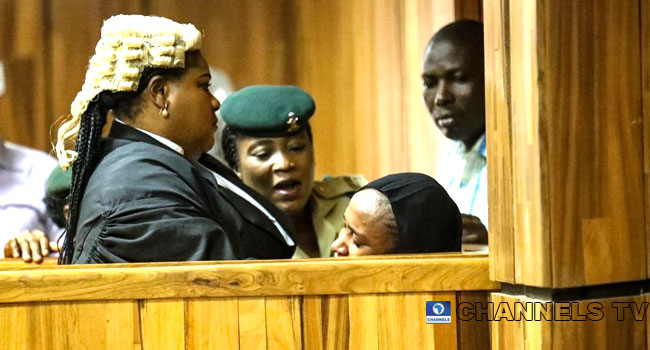 Maryam Sanda has approached the Court of Appeal in Abuja to challenge the judgement which sentenced her to death.

She filed the appeal three weeks after she was convicted and sentenced to death by hanging by a Federal Capital Territory (FCT) High Court over the death of her husband, Bilyaminu Bello.

In the Notice of Appeal predicated on twenty grounds, Sanda prayed the appellate court to set aside the verdict of the lower court and acquit her.

She claimed that the trial judge, Justice Yusuf Halilu, was tainted by bias and prejudices.

According to the appellant, this led to the denial of her right to a fair hearing and her consequent conviction based on circumstantial evidence.

Sanda alleged that the judge gave the verdict despite the reasonable doubt that was created by evidence of witnesses, lack of confessional statement, absence of murder weapon, lack of corroboration of evidence by two or more witnesses, and lack of autopsy report to determine the true cause of her husband’s death.

She insisted that the judgment of the trial court was completely “a miscarriage of justice.”

The appellant also pointed to the failure of the trial judge to rule, one way or the other, on her preliminary objection, challenging the charge preferred against her and the jurisdiction of the court as evidence of bias and a denial of her right to fair hearing as constitutionally guaranteed.

She, therefore, asked the Court of Appeal to allow her prayers and set aside her conviction and sentence and subsequently acquit her.

Justice Halilu sentenced Sanda to death by hanging on January 27 for stabbing Bilyaminu to death, bringing an end to the protracted trial of the appellant.

Late Bilyaminu was the son of a former National Chairman of the Peoples Democratic Party (PDP), Mr Haliru Bello.

Sanda’s trial centred on a judicial drama that lasted almost three years as a result of various setbacks such as multiple adjournments and failure of witnesses to appear in court, among others.

The police finally charged Sanda for culpable homicide in November 2017 and sought a death penalty against her on two counts.

They informed the court that the killing was premeditated, stressing that Sanda stabbed her husband with broken bottles at about 3:50am on the day the incident occurred.

Sanda has, however, repeatedly pleaded not guilty to the crime