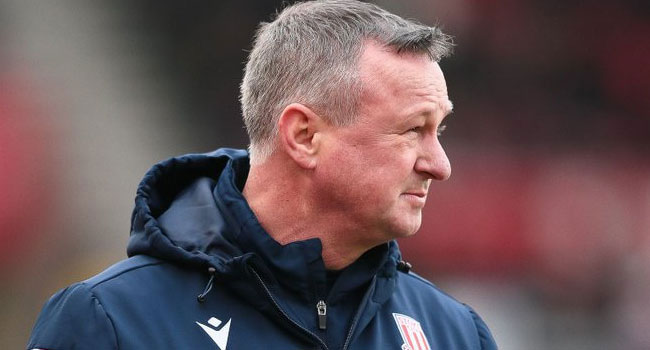 The friendly game between Manchester United and Stoke City has been cancelled after the Potters gaffer, Michael O’Neill tested positive to COVID-19.

Michael O’Neill was confirmed positive for COVID-19 following the most recent round of testing conducted on Monday.

The planned match between the duo was called off on Tuesday following the development with Stoke having arrived at the Manchester United’s Carrington training ground and were already in the academy building.

“Stoke City can confirm that manager Michael O’Neill has tested positive for the Covid-19 virus following the latest round of testing on Monday (June 8),” read a statement on Stoke City’s website.

“O’Neill had tested negative in the previous five rounds of testing. He will now follow the relevant guidance and undergo a period of isolation, whilst continuing to be in regular virtual contact with his coaching staff and players.”

The club statement revealed that “Assistant manager Billy McKinlay will take charge of training as the Potters prepare for their game against Reading on June 20. The Club will be making no further comment on this matter.”

Stoke are on 17th position in the English Championship with three points above the relegation zone.

United are billed to meet Tottenham as the Premier League resumes on June 17th after been forced to go on a break, mid-March, due to the COVID-19 outbreak.

In the most recent round of COVID-19 testing in the Premier League, no positive cases were detected.

Overall, 1,195 players and club staff have been tested for COVID-19 in the Premier League.