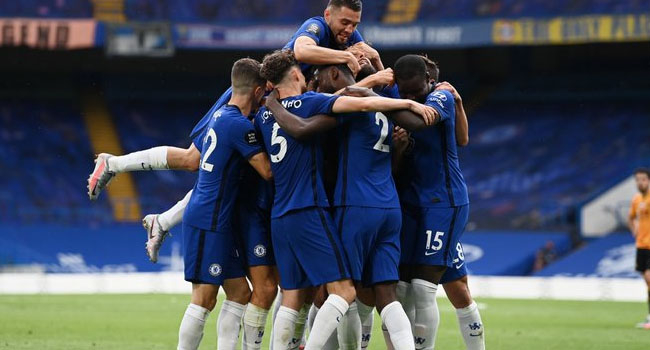 Manchester United and Chelsea sealed Champions League places on Sunday as Bournemouth and Watford fell through the trapdoor on a dramatic final day of the longest Premier League season.

Liverpool have crowned champions last month but there were many issues at stake in the final 90 minutes of a campaign that started on August 9 last year and was interrupted by a three-month coronavirus shutdown.

United finished third after a nervy 2-0 win in a Champions League shootout against Leicester while Chelsea ended in the fourth spot after beating Wolves 2-0 thanks to two goals on the stroke of half-time.

At the other end of the table, Bournemouth and managerless Watford dropped to the Championship while Aston Villa fans breathed a huge sigh of relief after they got the draw they needed at West Ham.

Leicester, in fifth spot, will play in the Europa League next season where they will be joined by Tottenham, who drew 1-1 with Crystal Palace to leapfrog Wolves.

Mason Mount whipped in from a free-kick to give Chelsea the lead and the home side went further in front almost immediately, when Olivier Giroud slid home.

United, whose form has dipped in recent weeks after they pulled themselves back into contention for the Champions League, were locked at 0-0 at half-time at the King Power Stadium.

But they finally broke the deadlock in the 71st minute, when Bruno Fernandes scored from the penalty spot after Anthony Martial was upended. Jesse Lingard scored late to seal the win.

The result is a huge lift for Solskjaer, whose team slipped well off the pace earlier this season, but is a bitter blow for Brendan Rodgers’ Leicester, who have been camped in the top four for almost the whole campaign.

Watford, who sacked Nigel Pearson earlier this month, started in disastrous fashion when they conceded a penalty in the opening minute at the Emirates.

Their fate was effectively sealed by further first-half goals from Kieran Tierney and an Aubameyang overhead kick, though a Troy Deeney penalty and a Danny Welbeck strike gave them hope.

Jack Grealish’s late goal for Villa was a hammer blow but the home side dramatically levelled a minute later through Andriy Yarmolenko. However, Villa held on to secure their Premier League survival.

An early goal by Harry Kane put Tottenham in front against Crystal Palace but Palace equalised early in the second half through Jeffrey Schlupp. That was enough for Jose Mourinho’s men to finish in sixth position.

Liverpool beat Newcastle 3-1 to finish the season on 99 points and second-placed Manchester City finished the season with a flourish, thrashing Norwich 5-0 to reach 102 goals for the campaign.