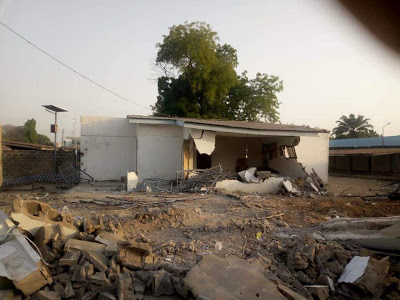 Officials of the Kwara Government in the early hours of Thursday demolished a house believed to belong to the late Kwara politician, Dr Olusola Saraki.

The house, popularly called Ile Arugo (old people’s home), is located along the Ilofa Road in the Government Reserved Area (GRA) of Ilorin.

Some residents gathered at the site discussing the demolition when the News Agency of Nigeria (NAN) correspondent visited the place.

A resident, who preferred anonymity, said he woke up to meet bulldozers carrying out the demolition.

NAN reports that the land on which the house was built became a subject of controversy in the last few days.

Men of the Nigeria Police had taken over the place in the last 48 hours to forestall break down of law following the Tuesday’s protest by some old women against the state government’s decision.

The building was a place where the late Saraki used to distribute foods, money and clothes to old women, a tradition that the former governor of the state inherited.

Gov. Abdulrahman Abdulrazaq, had on Dec. 27, 2019, announced the revocation of the tittle to land over alleged illegal possession.

The Chief Press Secretary, Mr Rafiu Ajakaye, said in a statement that the tittle was revoked to build a new government secretariat that it was originally meant for.

According to him, the land was unlawfully allocated to a private firm without any record of payment to the state government.

“No certificate of occupancy was issued in favour of the firm,” he said.

But the scion of the late Kwara political leader, Bukola Saraki, in his reaction accused the governor of waging a war against him and his father.

Bukola, who was the immediate former Senate President, was the state governor for eight years between 2003 and 2011.

He claimed that the said property was rightfully allocated to his late father in the name of one of his companies, Asa Investment Limited, since the 1980s and contrary to the claim of the governor, the land was properly allocated with a right of occupancy title issued on it. (NAN)