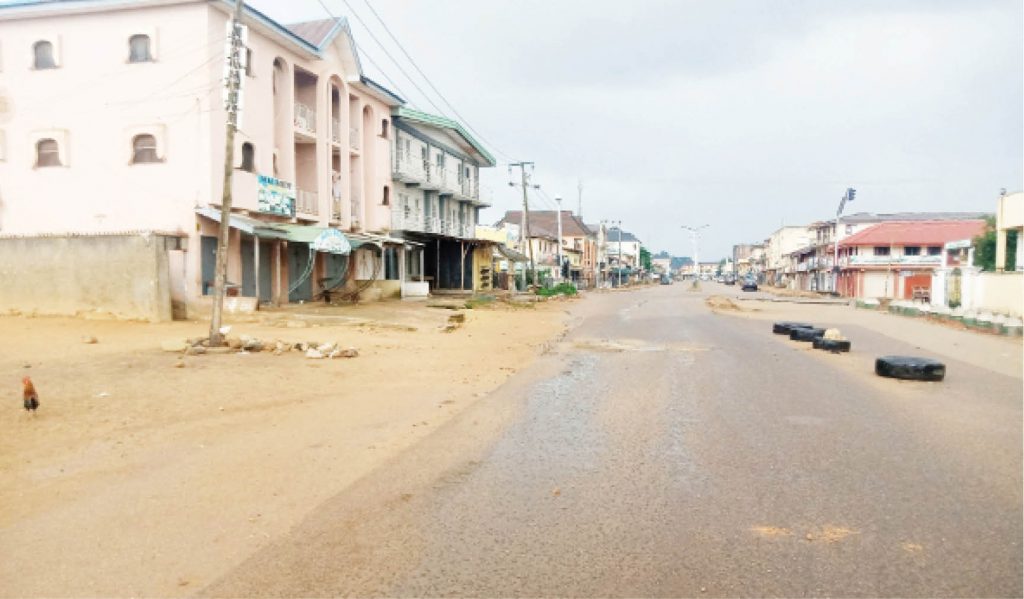 90 travellers in five buses were attacked by persons described…

Some of the survivors of Saturday’s attack on Fulani travellers around Gada-Biyu – Rukuba road in Jos North Local Government Area of Plateau State, Sunday narrated how security agents and other good Samaritans rescued them from the mob.

Their accounts came as new tally shows that 27 of the travellers were killed in the carnage, which has drawn outrage and condemnation.

90 travellers in five buses were attacked by persons described by the police as “suspected Irigwe militants and their sympathisers”.

The travellers had attended an annual Zikr (prayer session) and celebration of the Islamic New Year held at the Dahiru Usman Bauchi Mosque in Bauchi.

Muhammad Ibrahim, who escaped with injuries, told Daily Trust that a Christian tricycle operator had helped disguise him with a face cap and drove him out of the chaos into the city where he alighted at the Jos Central Mosque.

Narrating the incident that led to the killing of 27 travellers, Ibrahim said: “When we arrived Gada-Biyu area, there was traffic and we thought it was the normal traffic but before we knew it, people from all angles started stoning us and there was no way we could drive further because they had surrounded our busses and they were many.

“The area was congested, I don’t know how I came out of the bus but I was on the ground and they were hitting me with stones then I remember a tricycle operator whom I believe is a Christian asked me to quickly jump in, and he drove off,” he said.

Another survivor, Ibrahim Jibril told our correspondent that he found refuge in a nearby bush where he watched as the youths attacked and killed some of his travelling companions.

“Everyone ran for cover during the attack and fortunately for me, I ran into the bush. Moments later, I heard the siren and knew that security agents had arrived. Realizing the area had become safe for me, I ran out of the bush and headed for the soldiers who stopped their vehicle and quickly rescued me,” he said.

Yusuf Adamu who hid inside a culvert said he was lucky to still be with his phone and therefore dialled the number of a relative in Ekiti State who advised him to stay put until security agents arrived.

“My relative in Ekiti was able to call one of our travelling companions who had survived the attack and told them I was alive and hiding in a culvert. Moments later a call came in through my phone and I was advised to come out when I hear the siren.”

He said on hearing the siren he had rushed out of his hiding place and approached soldiers who rescued him in their vehicles.

The Secretary-General of Jama’atu Nasril Islam, (JNI) in Plateau State, Alh. Sani Mudi said that some of the victims were rescued by some good Christians, saying that the first person rescued was brought to the Jos Central Mosque by an Igbo resident.

He said: “I can sincerely tell you that some of the victims were rescued by some Christians in the Kabong area. Most of them are our political associates and felt that it was better to rescue them than to allow them to be killed. They have tried so much and deserved to be praised.”

Mudi, who urged Muslims and Christians to live together in peace called for calm and urged Nigerians to see one another as humans first before anything.

Also, 36 of the travellers who were heading back to Ondo and Ekiti states from Bauchi and got lost while struggling to flee from the scene of the ambush have been rescued.

It was reported that security agents have recovered two additional corpses on Sunday, increasing the death toll of travellers who were killed to 27.

Operation Safe Haven, the multi-security task force saddled with maintaining law and order in Plateau, parts of Bauchi and Southern Kaduna, said yesterday that 36 of the travellers have been rescued alive.

The State Secretary of Fityanul Islam of Nigeria, Malam Sabo Umar, who is currently the custodian of the victims, confirmed that 27 had been killed while 19 are still receiving treatment.

He, however, said those who have been rescued and are in his custody are 35 while 10 people are still missing.

Our correspondent reports that angry youth had reportedly attempted to block the Bauchi Road on Sunday morning, an action that led to the imposition of a 24-hour curfew by the state government.

Our correspondent who went around the city centre of Jos reports that almost all major roads and streets were deserted as yesterday evening when the curfew came into force. Residents remained indoors while a combined team of security personnel and vigilantes were seen combing the city to restoring law and order.

The Nigerian Supreme Council for Islamic Affairs (NSCIA) under the leadership of its President-General and Sultan of Sokoto, Alhaji Muhammad Sa’ad Abubakar III, has condemned the massacre in Jos.

The Director of Administration, NSCIA, Architect Zubairu Haruna Usman-Ugwu, said in a statement on Sunday no human life deserved to be wasted under whatever guise.

“We re-assure all peace-loving individuals and groups that appropriate actions would be taken after a thorough investigation.

“Also, the national secretariat of the JNI called on the federal and Plateau State governments to as a matter of urgency ensure the arrest and prosecution of the perpetrators of the Jos massacre.

Its Secretary-General, Khalid Abubakar Aliyu, said, “This act represents the height of bestiality and barbarism which cannot be swept under carpet.”

JNI further recalled the assassination of Major General Idris M. Alkali and expressed sadness that the perpetrators have not been prosecuted.

Similarly, the Muslim Rights Concern (MURIC) has called for the immediate arrest and prosecution of all members of what it called the “Christian militia group” responsible for the killing of 22 unarmed Muslim travellers at Rukaba, Jos, Plateau State on Saturday.

The Director, MURIC, Prof. Ishaq Akintola, made the call on Sunday in a statement.

“MURIC condemns this massacre in the strongest terms. It is barbaric. We hereby demand the rounding up of all members of the Irigwe Christian militia. They must be brought to justice. They ran away from the crime scene when they saw security men approaching.

“We reject the crocodile tears and lies of Governors Lalong of Plateau and Akeredolu of Ondo State who claimed that the attack was a case of mistaken identity. This excuse is the first sign of executive conspiracy. It is a shame that Akeredolu will trivialise the massacre of citizens of his state simply because the victims happen to be Muslims.”

The Inspector-General of Police (IGP) Usman Baba, on Sunday, ordered the immediate deployment of the Police Intervention Team to Plateau State to carry out an on-the-spot assessment in the aftermath of the Jos carnage.

The team, which comprises personnel of Police Tactical Units – the Police Mobile Force (PMF), Counter Terrorism Unit (CTU), Police Special Forces, amongst others are being led by the Deputy Inspector-General of Police in charge of Finance and Administration, Sanusi Lemu.

Also deployed are investigators and covert operatives from the Force Criminal Investigations Department (FCID) and the Force Intelligence Bureau (FIB), who are expected to provide additional investigative, intelligence and forensic support to the Plateau State Police Command in the ongoing investigations and rescue operations.

According to a statement by the Force spokesman, Frank MBA, the squads are to ensure enhanced, coordinated response to protect the community and boost public confidence in the affected area(s) of the State to prevent further attacks as well as bringing the perpetrators to justice.

Sheikh Jingir said though the killing was painful, Muslims must not take laws into their hands but demanded the immediate arrest and prosecution of the perpetrators.

“This is not the first time Muslim travellers are attacked and killed along major roads. Why should people continue to perpetrate such dastardly acts and go free? it is uncalled for,” he said.

Condemning what it described as renewed violence in Plateau State, the Arewa Consultative Forum (ACF) yesterday advised religious and traditional leaders to impress on their people to exercise restraint and not take the laws into their hands.

The ACF National Publicity Secretary, Emmanuel Yawe in a statement issued in Kaduna said since Simon Lalong assumed duty in 2015, Plateau had been relatively peaceful.

The Forum urged security agencies to take their responsibilities seriously adding that cases of breach must be investigated speedily and the culprits brought to book in the courts of law. “It is the only way to stop a breakdown of law and order in communities, the state of Plateau itself and the country,” he said.

While urging for restrain, MACBAN National Secretary, Baba Othman Ngelzarma said the fact that a procession was brazenly carried out in front of the police headquarters without being stopped was an indication of dereliction of duty on the part of the police force.

“Had they been stopped earlier on, the dastardly carnage would have been stopped,” he said.

The group demanded full accountability before, during and after the incidence and urged the federal government to assist the victims and their families with medical bills and palliatives.

A statement signed by Pam’s media aide, Pam Ayuba said the ES who is currently in Jordan on pilgrimage was highly disturbed and worried with the sad news of the mayhem unleashed on commuters on the Rukuba Road of Jos north local government area.

Attack not by our members -Irigwe group

The Secretary-General of Irigwe Development Association, Danjuma Dickson Auta, has condemned the killing of Fulani travellers.

Auta in a statement made available to journalists in Jos said: “As a nation that is known for peaceful coexistence, we hereby condemned such act and disassociate ourselves from it, as it was carried out far from where our onwards journey was proceedings and was not carried out by any of our members.”