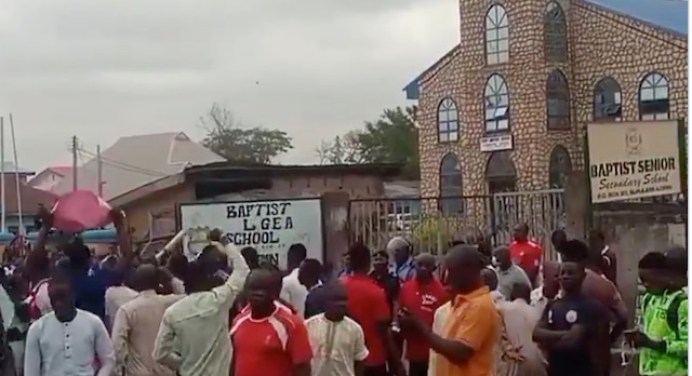 Suspected hoodlums vandalised churches, shops and schools at Sabo-Oke, Muritala Mohammed Way and other areas of the metropolis.

Other places affected include Post Office, Surulere and Maraba where churches and Christian schools are located

It took the combined efforts of officers and men of the Kwara State Police Command, Nigeria Security and Civil Defence Corps (NSCDC) and the Army to prevent a breakdown of law and order.

The tense situation sent fears down the spines of residents.

The hoodlums reportedly brandished machetes, cutlasses, bottles and other weapons while marching through some streets.

It was also gathered some of them wore masks, apparently to cover their identities.

Although the gate of the Cherubim and Seraphim College, Sabo Oke, Ilorin was locked, the hoodlums threw stones and other dangerous missiles into the premises in the presence of military operatives stationed at the gate of the school.

The violence also spread to St. Barnabas LGEA Primary School, Murtala Muhammad Way, Ilorin and some churches in the area.

The Christian community mobilised its own forces to counter the attack in a bid to protect their people and property.

Owners of shops and offices located in the areas hurriedly closed for the day, to avoid attack.

It was reported that some shops were looted by the hoodlums.

Police spokesman Ajayi Okasanmi said the prompt intervention of their men and officers prevented the situation from worsening.

He said peace had been restored.

The Pentecostal Fellowship of Nigeria (PFN) yesterday advised Kwara State Governor AbdulRaman AbdulRasaq not to set the state on fire with the hijab issue.

It spoke at Cornerstone City, Ibadan, the Oyo State capital, through its President, Bishop Wale Oke, while hosting the Ekiti and Ondo chapters of the Fellowship led by Bishop Clement Abifade and Bishop Joshua Kolawole Opayinka.

Bishop Oke said if the hijab issue was not handled with care, it could cause crisis in the country.