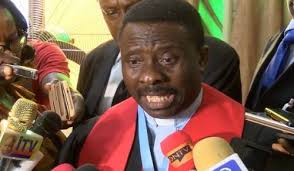 THE Christian Association of Nigeria on Wednesday expressed disappointment over the utterances of an Islamic cleric, Sheikh Ahmed Gumi with a call on him to immediately withdraw a statement credited to him.

The organisation said since bandits were being pampered with money while the Presidency had refused to caution him, what that meant was that democracy is on trial in Nigeria.

The PUNCH reported that Gumi had while addressing some bandits in Tegina forest, a border town between Niger and Kaduna States, profiled military operatives saying, “soldiers that are involved in most of the criminalities are not Muslims…soldiers have Muslims and non-Muslims. The non-Muslims are the ones causing confusion just to ignite crisis.”

But CAN in a statement by its General Secretary, Joseph Daramola, titled, ‘Gumi: We are disappointed in FG,’ wondered what good Gumi’s statement could do to improve the insecurity in the country.

He said, “We call on Gumi to immediately withdraw the unpatriotic and divisive utterances credited to him in the interest of peace and unity of this country,” Gumi was quoted as saying,

“Now that bandits are being pampered, money is being made available to them and highly respected politicians and religious leaders are speaking for them, criminals are being emboldened to commit their unlawful actions with impunity.

“We still want to believe that Sheikh Gumi was quoted out of context. But if it is true, then, the unity and peace of the country are being threatened by the sentimental statement of this cleric.

“We have not heard the Presidency react to this dangerous statement ; cautioning this cleric who has thrown caution to the wind. Such a grave allegation is evil, divisive, unpatriotic, ill-wind and reprehensible.

“We ask again, is Sheikh Gumi trying to polarise the military along the religious divides? Is he inciting the bandits against Christians? Is Gumi saying that the Muslim soldiers are on vacation in the ongoing war against terrorists, murderous herdsmen and bandits?

“President Muhammadu Buhari’s prolonged silence is tantamount to an endorsement of Gumi’s dangerous statement. If what Gumi reportedly said was attributed to a Christian leader, the security operatives would have invited him or declared him wanted and the Presidency would have publicly condemned that Christian leader.”